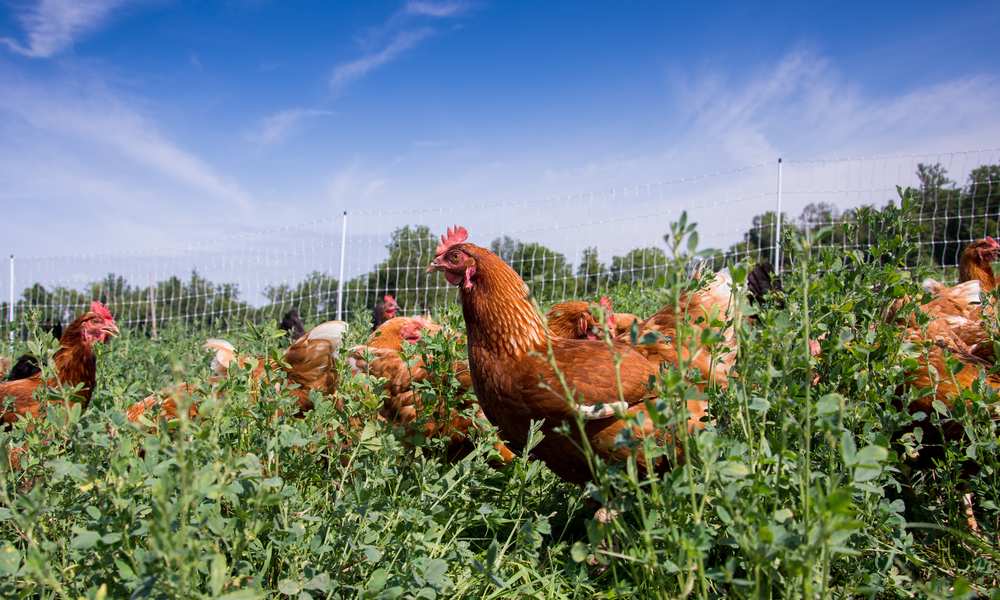 Figuring out your chicken’s diet can be a bit complicated. Many factors need to be included!

You want your chicks to be healthy, and the food they eat is one of the most important things on that list. Once you go diving online into chicken research, you might get confused. Should you go with this food or that food – it can be a bit too much!

But there is one food that everybody seems to be wondering about, and that’s Alfalfa. So if you run into that name, you probably want answers. Is it healthy, and to put it plain and simple – can chickens eat Alfalfa?

Well, the wait is over! We’ll cover everything you need to know and a little more. So hang in there, and let’s figure this out:

Let’s get this out of the way: YES, chickens can eat Alfalfa. Not only that, they love the stuff!

But here’s the thing, is it healthy? And what is Alfalfa anyways?

We’ll cover all these subjects, don’t worry – but a word of advice before we start. No matter what you decide to feed your chickens, always make sure they have fresh drinking water!

Many foods can be good for your chickens, but dehydrating can be fatal. Your birds can’t even go a day without drinking water. That means that you need to find a way to make sure your chickens can have a drink of water at all times during winter.

With that said, let’s continue:

Alfalfa is a perennial flowering plant that has been used to feed livestock for hundreds of years. It is a legume that belongs to the Fabaceae family. What are legumes, you’re asking?

Many plants belong in this family – Clover, beans, peas, chickpeas, peanuts, etc. But the reason you might not have heard about Alfalfa being on the list is the way it’s grown and harvested.

While Alfalfa can be harvested for human consumption, it is usually saved for livestock, and more often than not, it’s used for hay, grazing, and silage.

The plant originated in south-central Asia, and we have reasons to believe Iran is its country of origin. But in the last couple of centuries, it has spread all over the world!

Because it’s so popular, there are many names by which this plant goes. If you’re in Europe, for instance, you’ll probably hear the word lucerne benign thrown around. Don’t worry; it’s the same plant.

Alfalfa is famous for being packed full of vitamins, minerals, and proteins. We’ll get back to those nutrients in a moment, but the point is that it is very healthy for your chickens! We also have to mention that these properties are excellent for us humans too!

The plant has been used as a medicinal herb for hundreds of years. They can be found as dried leaves to be used as a supplement. They are known for lowering blood pressure; they can be used as a diuretic and increase breast milk production!

With all that talk about Alfalfa coming in different shapes and sizes, how about we take a look at what kinds are good and if any are bad for your chickens.

Pellets are quite a polarizing subject amongst the chicken and farming folk. Some swear by them, while others avoid them altogether! So we figure it’s best to answer the question here and now: can chickens eat Alfalfa pellets?

But in reality, it’s pretty simple. It all depends on the chickens! Some chickens love pellets; they will pack them and clean out the feeders completely! But others don’t even acknowledge their existence. The one thing this honestly doesn’t depend on is what the pellets are made of. It’s their texture and everything else that your chicks like or dislike.

You can get Alfalfa pellets that are packaged for rabbits and feed them to your chickens. It’s pretty much what everybody does since they’re not frequently sold that much to chicken owners.

But don’t worry! Even though it seems as if you should find the one with the word chicken on it, it isn’t really necessary. Pellets are pellets, it’s as simple as that.

Pellets aren’t the only form of Alfalfa that you should be considering. Alfalfa cubes are also a great option. They can sometimes come in smaller or bigger bags, and they are sometimes labeled as horse food.

But just like the rabbit situation, you must not let this discourage you! These alfalfa cubes are great for your chickens, as long as you soak them up in water before your chickens get a hold of them.

Before we start suggesting hay, we have to mention a couple of drawbacks that some people complain about regularly. Hay can be an excellent food for your chicken, but you need to be careful!

How you give hay to your chickens is the most important part of the equation. Especially if you want to avoid having crop-bound chickens, this is a serious concern, we get it, but we’ll get over everything you need to know.

But people don’t just worry about Alfalfa hay; on the contrary. Your chickens becoming crop-bound is something you need to worry about with all types of hay.

So the most important thing here is to not have hay available at all times and in all quantities. Confused? Let us explain:

There are a couple of ways that we feel are the best and most safe, as far as hay-feeding goes. The first is to have it tied on a rope and up in the air! The next is to have it in bits and pieces all over the chicken area for your little friends to find.

This way, your chickens will never get bored. But more on that in a minute. For now, let’s cover some nutritional values!

Alfalfa, in any shape or form, is famous for a couple of things. It has plenty of proteins, vitamins, and minerals. These are incredibly important for any animal, us included.

But let’s see what that fame is all about and if these claims are based in reality.

The first thing that we have to mention is that you can’t find a nutritional value chart for Alfalfa. Humans usually use the plant as a herb, so a traditional nutritional chart just isn’t needed.

But we feel it’s important to know what your chickens are eating!

As we can see from this table, Alfalfa is full of minerals and vitamins that can be incredibly helpful for the health of your chickens. The plant is also full of fiber, from which comes about 1 gram of protein and 1 gram of carbohydrates (per 33g).

This may sound like it’s not a lot, but it’s a pretty big deal for your chicken!

But if you’ve done your research, you should have figured out by now that hay or pallets probably aren’t this packed full of nutrients! Well, that’s because this table is for the sprouts, not hay or pellets!

This is actually the perfect segway to the next question we wanted to answer:

And the answer is yes! The sprouts and the leaves are your chicken’s favorite parts! They’re also the parts you need to worry about as far as quantity goes. But as long as you don’t give your chickens too much all at once, they should be fine!

You can’t really only feed Alfalfa to your chickens. Sure the leaves are full of healthy nutrients, but this plant should be used as a fun treat, not a primary food source.

We suggest letting Alfalfa grow all over the chickens walking area. This way, they’ll have fun looking around for the treats. And you can make sure that the ones they find are healthy for them!

The Benefits Of Hay

Last but not least, we have to talk about hay for a little bit. We mentioned that you need to be careful and that your chickens could have severe health issues if they get too much of the stuff, so it’s time to clear this up.

There are numerous cases of chickens finding their way into Alfalfa (or any other type of) hay and suffering some major health consequences. The worst one of which is crop-binding.

Crop binding means that your chicken won’t be able to get all the hay that is plucked down to its digestive system. After this, no food or water can go through. This may seem like an easily fixable issue, but the problem is that chickens can’t survive for long without food or water.

Even the healthiest of chickens can die after just one day of not drinking fresh water. So if you grow Alfalfa or anything else, keep your chickens away from the bales!

This is why we recommend either taking small amounts, tying them into mini bales and hanging them up so the chickens can peck at them, or buying that small amount in pet stores! Not everybody grows Alfalfa or has bales of hay just lying around. The mini bales that are sold for rabbits will do just fine!

Hay can keep your chickens happy throughout an entire winter, so having some at hand is always a good idea! And If you’re planning on it, why not go for Alfalfa? It’s nutritious and full of fiber and protein!

So there you have it, Alfalfa is healthy and great for your chickens; the question is finally answered!

Always try to keep yourself informed, so you know exactly what your chickens need and want. A happy chicken is a healthy chicken. We hope that we helped with this particular dilemma.

So go out and get yourself and your chickens some Alfalfa – hay, sprouts, or pellets, it doesn’t matter!