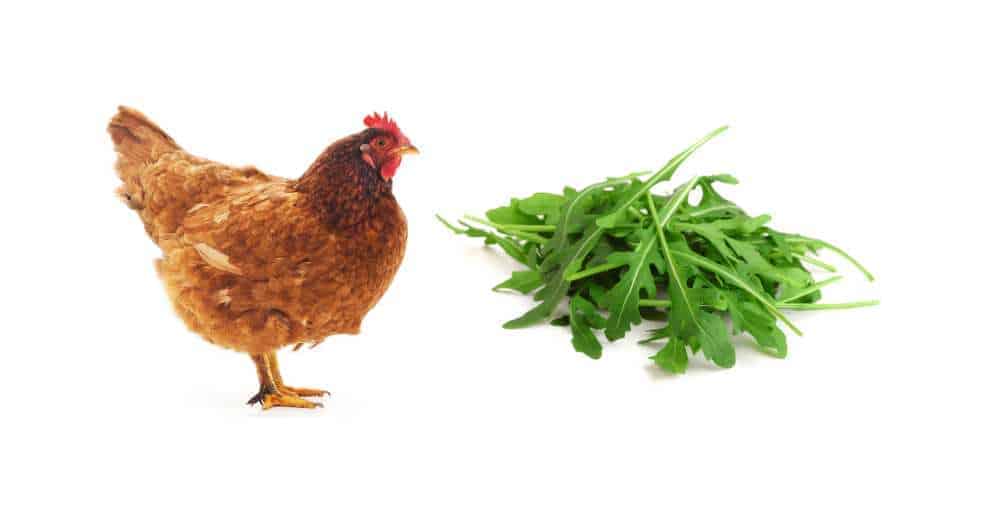 Yes, chickens can and will eat this peppery green. The fact that this salad component is hated by many and loved by a bunch is not exactly a mitigating circumstance. I personally don’t like arugula, but it seems that my chicks enjoy it even more than I could have imagined.

Regardless, there are some things you might want to set straight before feeding this bittery green to your chickens so in order to do that, I suggest you grab a salad (preferably without arugula), get comfy, and keep reading!

Arugula – Everything You Want To Know

This vegetable is in common use when talking about salads. It’s a favorite of some people, but to others, it’s just another thing to fish out of their salad.

From my experience, chicks are not that picky. There were a few instances where some of my chickens refused to eat these vibrant green leaves, but that’s all right (I understand their choice).

The majority of my chickens loved it from the first time I’ve given them arugula to the present day. People that don’t like this food might think that chickens are also repulsed by the strong and unusual smell of it, but I assure you that’s not the case.

Chickens don’t care that much for the flavor or the smell of the food, as long as it sits well with their stomach. If they have an unpleasant encounter with some type of food, there’s a smaller chance they’ll eat it next time you serve it to them.

Taking into consideration that chicks usually eat a variety of veggies, cereal, fruit, and other table scraps, arugula fits perfectly on that list.

Every good chicken owner knows that these animals don’t eat one thing over and over and that it’s good to introduce a new component to their diet from time to time. This prevents them from getting bored of a specific kind of food, thus eating it in larger quantities and getting full quicker than usual.

What makes this food great for chickens is that you don’t need to worry about calorie surplus or your chickens getting bulky before you need them to. One full cup of raw arugula contains only around two and a half Calories. Here are some more nutritional data regarding arugula that might interest you:

As you can see from this data, arugula is as low in calories as in everything else. This is the reason number one that made me try feeding my chickens with it.

When the food is this low in every nutritional ingredient, you don’t have to worry about the amount you give your chicks. You can probably give them everything that’s leftover from dinner or a healthy handful if you’d like.

Naturally, there are some chickens that’ll refuse to eat it but don’t worry, the rest of them will tear that arugula apart in seconds!

How To Feed Your Chicks Arugula?

There are some options in front of you, the only real mandatory thing you should do is to wash the arugula. Everything you do with it after a thorough wash is your preference. At first, I experimented a little bit just to see what’s the best way to feed it to my chicks.

It might prove different for your chickens, but it’s important you give them time to adjust to the newly added component of their diet. Some might accept it right away, while other chicks might need a little bit of time and persistence on your side in order to get used to the new food.

Needless to say, some chicks will never eat arugula. This is not due to some serious reason, instead, it’s the same reason I don’t eat it. They just don’t like it!

If you encounter this, just remember there are a lot of other foods that those chickens will eat instead of it and that there’s no reason to get upset.

Another thing I like to do is to hand feed the chickens with arugula. This is a fantastic and fun way to bond with your chickens and it can often help them get used to the unusual smell and taste of this leafy green.

If any kids come to your home, you can also tear the arugula leaves into small patches and let the kids hand feed them as well!

There’s really nothing much to indicate that there are some serious unwanted side effects caused by arugula.

One of two things that you should keep in mind is that too much of every food is bad. There’s no exception to this, even with light veggies such as arugula.

People can experience some abdominal pain and cramps if they go overboard with arugula. This can also happen to chicks, and they’re more prone to tummy aches than humans. Pay attention to your chickens when you feed them arugula, and if you notice any unusual behavior, next time give them a smaller amount.

The other thing you should keep an eye out for is flatulence. This is another abdominal issue that chickens can experience when overfed with arugula. Luckily, this is something that comes and goes really quick, so there’s nothing to worry about.

As I’ve said, there are no real threats that come from this food. Both of the potential unwanted side effects are short-term and are no big deal. So don’t stress about them and don’t let this stop you from feeding arugula to your chicks.

What Goes Well With Arugula?

Sometimes I like to mix up a salad for my chickens that includes some other veggies alongside arugula. Some of my favorites are kale, broccoli, beets, pumpkins, and cucumbers.

What I like to do is to chop up everything in advance, mix it up really nicely in a bowl, and then serve it to the chicks all at once.

When I started implementing arugula into my chick’s diet, this was a perfect way to ease the intense smell and flavor of it with other veggies (especially cucumbers). The smell and the juiciness of the other veggies dilute the arugula flavor, thus making it much easier for the chickens to get accustomed to it.

I suggest you try the same if your animals refuse to eat arugula by itself. Maybe after a few weeks, you try feeding them fresh arugula again, but for the time being, just serve it as a part of a salad.

There’s no doubt when asking can chickens eat arugula. Besides the odd smell and taste of this vegetable, there’s nothing wrong with it.

Another plus is if you’re like me, and you don’t like arugula, but have some laying around or you’ve bought some by accident, you can get rid of it by feeding your chicks with it. You won’t waste any food and your chickens will be delighted by a new addition to their diet.

So if you do have some laying around or you’re heading to the market, I suggest buying some and seeing how your chickens react to it. I hope they’ll like it as much as my chicks do!