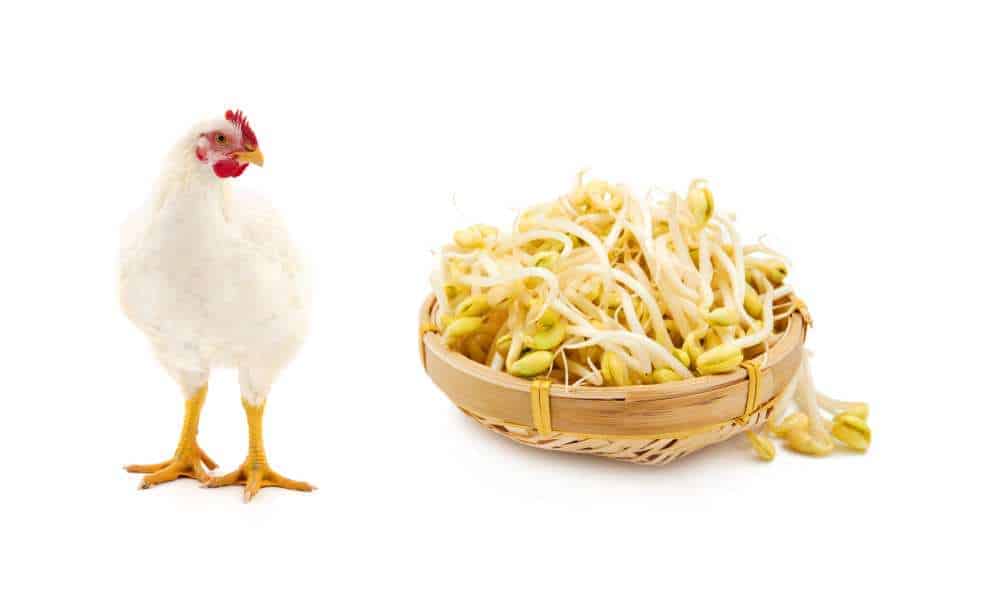 Can chickens eat bean sprouts? That is the question! While Shakespeare probably never asked this, many farmers certainly did. The answer to this one is yes, but there’s much more to the story.

Beans are a diverse bunch, and not all of them are great for poultry. There are some do’s and don’ts that you need to know before offering bean sprouts to chickens. By the end of this article, you’ll know whether to feed this food to your hens or not.

If this topic is something that interests you, then keep scrolling!

Bean Sprouts – Are They Worth The Hype?

Sprouts have been all the rage in the health food scene for the past few decades. Have you ever wondered why? If it’s just another fad, then you have to admit that it’s a persistent one.

No, it’s not a fad, and there’s a valid reason why sprouts, any kind, not just bean sprouts, are so popular.

When sprouting seeds or beans, their nutrient density goes up drastically. As the sprouting process commences, it activates enzymes and removes certain toxins found in the dried bean. Also, some of the good stuff gets lost when the plants mature, so that’s why you (or the chickens) should eat them while in this young form.

Due to the high enzyme and antioxidant content, the sprouts are easier to digest than the bean from which they sprung. This applies both to chickens and humans. More efficient digestion means better access to the plentiful nutrients found within sprouts. These nutrients include various vitamins and minerals, fiber, and heaps of protein.

Speaking of protein, sprouts are often promoted as being a great source of this macronutrient, and it’s true. Furthermore, the amount of anti-nutrients that inhibit the body’s access to protein is significantly lower in the sprout than in the dried bean (or seed).

All in all, the sprout is the stage of a bean’s development that provides the most nutritional benefits to its consumer. Everything that’s 2 inches or shorter can be considered a sprout. If the plant is longer than that, it’s already lost a portion of its nutritional value.

In the previous section, we’ve roughly covered the nutritional benefits of bean sprouts. Now, we’d like to get into a bit more detail and talk about the specific nutrients and why they’re good.

But first, let’s specify which bean sprouts we’re talking about here. We will focus on mung and soybean sprouts, as they’re the most common ones and are 100% safe for chickens to eat.

Aside from those two, smaller legumes like lentils, peanuts, and garbanzo beans are great options too.

Larger beans, such as kidney or lima, are best avoided, and we’ll explain why later in the article.

OK, with that out of the way, let’s get into the nutrients found in mung bean sprouts. The most important ones are:

And now the same for soybean sprouts:

As you can see, both types of sprouts contain significant amounts of protein. In case you don’t know, proteins consist of amino acids, which are used in the construction of certain body tissue. Muscles, skin, and cartilage are examples of tissue that’s mostly made of protein.

The daily protein requirements differ depending on the type of chicken, and the recommended amount can be anywhere from 16 g to 22 g. Aside from the quantity, the quality and bioavailability of protein are also important. This is where bean sprouts shine, as they meet the highest standards for both factors.

Folate or folic acid (Vitamin B9) is an essential micronutrient. Chickens of all ages need it for proper brain development and mental health.

As for the daily requirements of folate, hens need quite a bit of it. Some estimates say that the optimal intake is between 1 g and 1.5 g per kilogram of chicken’s body weight. While it’s unlikely that sprouts alone will suffice here, they are still an excellent source of this vitamin.

Vitamin C is crucial in a hen’s laying performance and the quality of its eggs. It enables the animal to maintain normal metabolic activities.

Pay Close Attention To These

Before you start feeding your chickens bean sprouts, there are a couple of things that you need to know.

Chickens must never eat dried beans. These have a toxin called phytohaemagglutinin, which can create severe problems even for humans, but it is almost always fatal for chickens. If a hen ingests as little as three beans, the toxin will kill it in a matter of hours. The worst part is that there’s nothing you can do to save it.

Avoid kidney beans and their sprouts like a plague. Stick to the safe options such as lentils, mung beans, soybeans, and chickpea sprouts.

It is also vital to know that eating raw sprouts is not without risk. Due to the warm and moist conditions required for sprouting, certain bacteria might develop during the process. The most common ones include Salmonella and E. Coli, which are harmful to both chickens and humans. Aside from those, Listeria and Bacillus cereus are also associated with sprouts.

Now, the above-mentioned diseases are more common in industrially grown sprouts than with those produced at home. So, if you plan to feed bean sprouts to your hens, we strongly recommend you grow your own.

The process has to be done right to avoid the formation of bacteria. The good news is that it’s super simple to do, and it’s pretty hard not to get it right.

To learn how to sprout beans at home, proceed to the next section.

How To Grow Bean Sprouts For Your Chickens?

Bean sprouts aren’t the cheapest chicken food out there. So, instead of buying them, why not sprout the beans yourself? Besides the lower price, homegrown sprouts are less likely to be infested with bacteria, as we just mentioned.

In the following paragraphs, I’ll explain how you can sprout mung beans, but the same method works for any other kind of bean. The process is relatively simple, and it takes minimal effort.

You will need a canning jar (pint or quart), a piece of rubber shelf liner, and a tablespoon of mung beans.

Take the shelf liner and cut it in a circle so that it fits the ring part of the jar. Inserting this little piece of material enables air circulation in the jar, which is crucial.

Place the mung beans into the jar and cover them with cold water. Leave the beans to soak for 8-9 hours, then drain them. Pour more water into the jar, close the lid, and swirl/shake it to rinse the beans. Drain again, and repeat the process two times. After that, flip the jar upside down and let it sit until all of the water has drained.

Leave the jar in a place with low light, and rinse it two times a day for about 4-5 days. It is vital to rehydrate the beans because this will help to initiate the sprouting process.

When you notice the first cracks in the beans, place the jar in a sunny spot but not in direct sunlight. Putting it on a windowsill is out of the picture because the light and heat there are too strong there.

A better idea would be to set it in the corner of a room that still gets some sun. Keep rinsing and draining twice a day until the sprouts are fully grown. Once you see leaves on the sprouts, it means they’re ready to be eaten!

Feed the sprouts to the chickens raw and use up all of them within 5-6 days.

Before we leave you, let’s do a quick recap of the most important points from the article. Here’s what you need to remember:

Follow the guidelines shown above, and your birds’ health will not be compromised. When done right, bean sprouts are a great addition to a chicken’s diet. They’ll provide your hens with tons of nutrients and will help them thrive!

Learn More: What Can Chickens Eat? Feeding Your Hens And Roosters