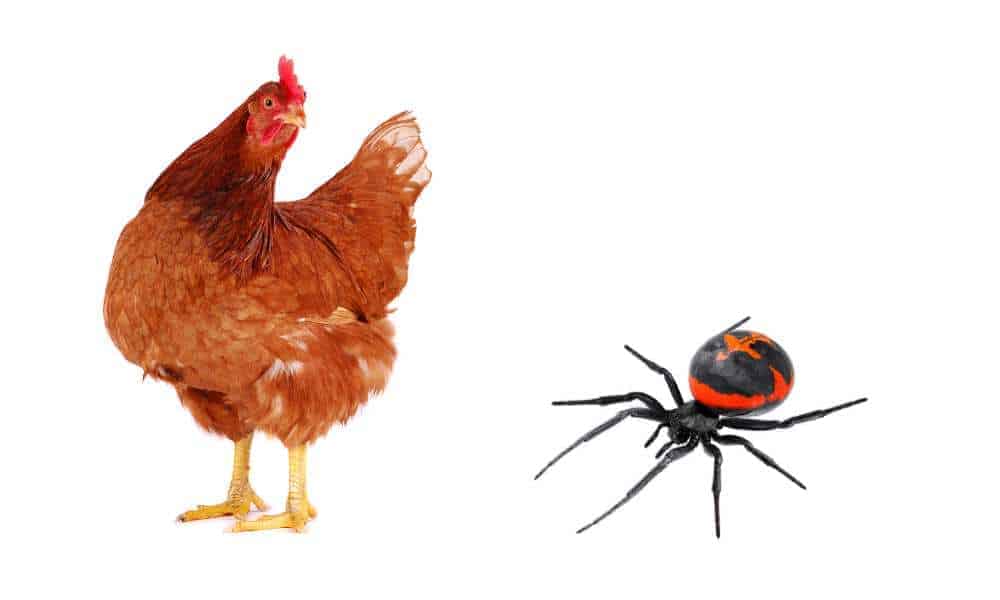 When someone asks you a question that goes along the lines of “can chickens eat black widows?”, it’s only natural to have a strong instinct to say no. But, if you said no, you’d be wrong.

Chickens actually can eat black widows, but shouldn’t! Surprising, huh? Well, I was amazed as well when I first found out that your little chicks can devour this seriously venomous insect.

There are some things that you should pay attention to if you want to ensure the well-being of your chicks one of them eats a black widow, but don’t worry – it’s nothing complicated.

If you’re keen on learning how to react in this particular or a similar situation, I suggest you lay back and keep reading!

Poison – How Does It Work?

It’s absolutely expected from you to think that a spider that is as venomous as a black widow can seriously harm one of your animals (including chickens). This is where you’re mistaken, but don’t worry because you’re not the only one.

When I first experienced my chicken swallowing a black widow right in front of my eyes – I was terrified. I thought it would most certainly kill it, but to my surprise, my chicken lived and is still alive now.

Like any other responsible animal owner, I’ve contacted my vet immediately in order to ask them what is to be expected from this situation.

To my surprise, the vet started laughing. This is when I learned that the black widow poison is only effective when injected through their fangs. What does this mean?

This means that if a chicken manages to swallow the spider before it bites the chicken, nothing will happen.

I was still terrified because I didn’t know if my chick got stuck in the process with those fangs or not.

My vet explained how a black widow bite works, and so I searched my chicken’s body for any signs but thankfully I found nothing.

To save you the stress, let me explain: the poison that is found in the black widow bite attacks the nervous system. In order for it to be effective, it needs to come into the victim’s bloodstream. This is why spiders bite and not spit poison, because if they would – it would be ineffective.

So the moral of this story is – if you don’t see a bite, then don’t be worried! There are still some situations that might be dangerous. One of these situations is that your chick gets bitten by a spider first, and then swallows it.

This is probably the most common situation where your animal will experience the effects of the black widow’s poison and potentially die.

Another potentially dangerous situation si where your chick tries to swallow a still alive black widow that bites your chicken’s inner throat injecting it with its poison.

This situation is much more dangerous than the previous one because if your animal gets bitten like this, you won’t be able to see the bite and you won’t realize your chicken got bit until it’s probably too late.

Honestly, if this happens there’s nothing you can do. Even if you take your chick to the vet as soon as possible, there’s no guarantee they will see the bite either.

The estimated time for the venom to kick in is 1-3 hours for humans, but for chickens, it goes downhill much quicker as they are smaller in size and don’t have that much blood in them.

I personally recommend that in an event like this you take your chick to the vet regardless of if you think it didn’t get bit, just to be sure.

How Can You Prevent This?

The whole western coast of the United States is native to the black widow. This means that you can find these spiders from Canada to Texas.

If you’re native to this region there isn’t much you can do. There are some sprays and creams that repel the black widows, but their effectiveness is quite questionable.

This just means that you’ll have to be ready for a black widow or two in your house from time to time.

There are some animals that do hunt and eat black widows like praying mantis, but they’re hard to come by and you can’t keep them around to ensure that no black widows will disturb any of your animals including chickens.

There is a possibility that certain types of birds will occasionally eat a black widow or two, but not on purpose. This may relieve some of your stress related to this topic but not in a significant amount.

So without any sugar coating – there isn’t an efficient enough way to deal with this situation. With that being said, you need to keep in mind how rare these spiders actually bother someone.

Being popularised as one of the most venomous spiders in North America and southern Europe, these insects actually just prey on small flies and insects and don’t bother bigger animals or insects.

The most probable scenario where a black widow actually bites a dog, a chicken, or a human is when it feels threatened. These situations are extremely rare, but if you know you live in an area that is densely populated by these or any other venomous spiders I suggest you watch your step.

The only useful thing I’ve found as a solution to this problem is getting a well-built chicken coop where your chicks will rest safe and won’t be threatened by not only spiders but various animals that might hurt them.

Good coops and pens consist of a densely knitted wire that will prevent any small animals or insects to go through it, and a well-made top cover that will leave enough room for fresh air but will also protect the chickens from above.

Nothing else will come in handy as this will, because (as I’ve mentioned earlier) the chemicals that are used to prevent black widows to come into someones living space are only half effective.

Only a physical barrier will have an effect, so I’d highly advise you to look into who’s selling those kinds of coops or to look up a tutorial on how to make one yourself.

I can tell you from experience that they are not hard to make, but some materials like densely knitted wires might be hard to come by.

Should I Feed My Chickens Black Widows?

Even if you think it’s a good idea to let your chickens eat these poisonous spiders, don’t be fooled. The fact that they won’t die if they eat one or two of these doesn’t mean they should eat them regularly. It goes without saying that you shouldn’t intentionally feed your chickens any poisonous spiders in any given situation!

So what if, even with your best intentions to protect your chickens, this still happens?

Well, as I’ve said – the best thing you can do (and the smartest) is to consult your veterinarian of choice. You need to remember one thing and that is that trained professionals always know more than you and are keeping a cool head at all times.

This is why this is the exact thing I have done when this happened to one of my chickens. Even if it turned out just fine, I was relieved that I got a confirmation from a vet that all will be good.

There can be scenarios where you can’t reach your vet or you’re too far away from one to get there in time.

If you find yourself in this situation, try sucking out the poison as fast as you can. The best you can hope for in this situation is that you’ve noticed the bite just seconds after it occurs.

If you’re still wondering can chickens eat black widows, let’s make it more simple than it already is:

They can, but they should not! The last thing that should be mentioned is that even if your chick manages to eat a black widow without getting the venom in their veins, they can experience severe tummy aches and digestion problems.

So I highly advise you to avoid this situation at all costs just to be sure that your chicken’s well-being won’t be in danger.

There are some insects that your chicks can eat, but remember that black widows or any other poisonous spiders for that matter. Stick to worms and you won’t give your animals any troubles!