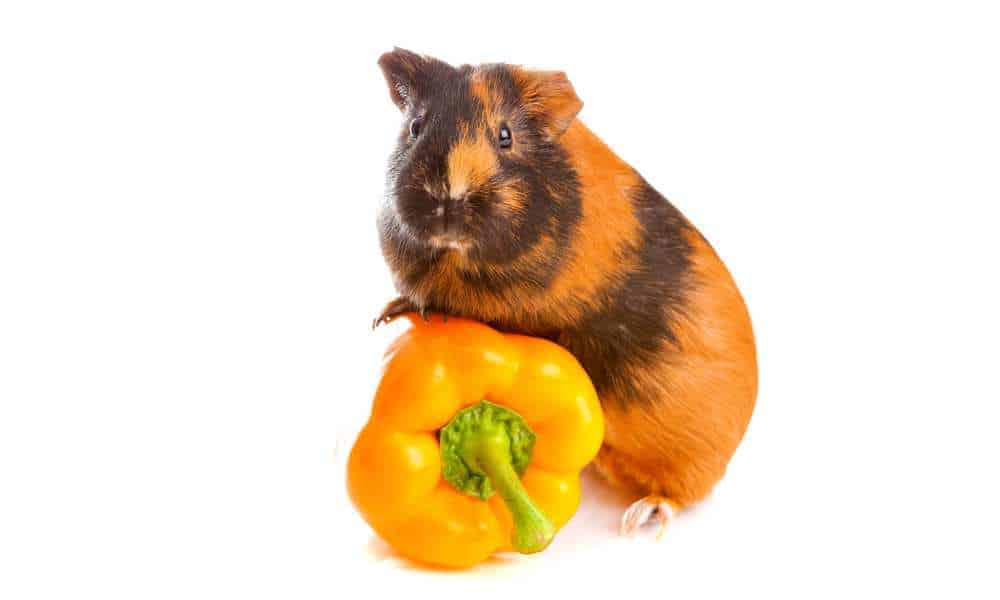 No matter how dynamic some animals are, they will need to quickly recharge their energy to ensure that they continuously move on. Guinea pigs, in particular, will want to stay active all day long. Fortunately, their diet makes them healthy and capable of doing so.

Some people still search for ways to make their diet even more diverse, and in doing so, many ask, “Can guinea pigs eat bell peppers?”. Will there be any repercussions in offering them some?

I’m glad to inform you that offering guinea pigs with some bell peppers is an OK thing to do, but only on some occasions. How much can you offer them exactly? What are the health benefits of providing cavies with bell peppers?

Believe it or not, many different types of bell peppers are on the market. Sadly, most bell peppers have high traces of sugar present in them, but not all. Stick around and find out which ones are safe for guinea pigs’ consumption!

Guinea Pigs require lots of healthy nourishment to sustain themselves throughout the entire day. And how couldn’t they? With cavies’ daily routine of nonstop playing and goofing around the place, they will inevitably run low on the energy supplies rather quickly.

Just because guinea pigs are naturally energetic creatures doesn’t mean that they have infinite stamina. They need a proper food regime. Luckily for us, their diet isn’t complicated at all, and as long as you follow the rules, nothing wrong will happen!

Of course, a constant supply of fresh water is also necessary for your guinea pigs!

They get thirsty rather quickly in the summer and should always have cold water somewhere close. If you release your guinea pigs to roam freely in the room, make sure to leave a couple of bowls scattered across the room, filled with water!

So, why would you even consider adding bell peppers to guinea pigs’ daily diet? Doesn’t the list above prove that they are getting all the necessary nutrients they yearn for? Contrary to some beliefs, bell peppers can aid significantly in the general health of cavies.

As long as you provide your guinea pigs with one or two slices of bell pepper, it will remain safe.

Exceeding that amount may cause some intestinal problems, as some bell peppers have higher quantities of sugar present inside them. Add slices of bell peppers four times per week in the main serving cup containing veggies.

Before dissecting the pros and cons of adding bell peppers to cavies’ diet, it’s necessary to understand what bell peppers exactly contain. To illustrate that, I’ve gathered all the main ingredients present in green bell peppers:

What most people notice first is the overall percentage of water present in fresh bell peppers. If you had concerns about whether your cavy is drinking enough water on those hot summer days – let me propose an alternative. Add some peppers to their veggie mix to fill them up on water!

How do guinea pigs benefit from eating bell peppers?

To ensure that your guinea pigs have a long and healthy life, it needs to be feed adequately. Many foods don’t contain a good amount of iron. Many complications can occur when cavies are eating food that isn’t rich in iron.

The shortage of iron can cause anemia, poor immunity, fatigue, and loss of appetite. Guinea pigs need to eat more times per day to sustain themselves sufficiently. If they suddenly stop having a strong drive for eating, it might be a clear sign of iron deficit.

Blood vessels will use bell peppers and extract the pantothenic acid that helps with creating red blood cells. Many other veggies aren’t so high in iron so make sure you offer your cavies some bell peppers to help them out in desperate times!

Guinea pigs can’t correctly manage the heat in their organism; thus, it’s necessary to put them in a warm and well-ventilated place. And not only that, you will need to provide them with a spacious cage filled with toys and obstacles for them to play with!

Cavies sometimes have difficult times properly seeing the stuff around them, leading to specific physical injuries. They might hit something they didn’t see in time and cut themselves if they aren’t careful. I was worried sick of that in the past!

Luckily, I’ve discovered that bell peppers can help them even with that! Carrots aren’t the only veggies that can help animals with poor eyesight; bell peppers also contain lutein and zeaxanthin. All of these substances will improve eye health in cavies when ingested in reasonable amounts.

All guinea pigs are cheerful little animals that will put a smile on your face whenever you see them play around. Most of their happiness comes from eating correctly. Unfortunately, some cavies tend to overeat some foods as they just can’t resist their flavor.

Eating in uncontrolled amounts can lead to guinea pigs becoming fat. There is a thin line between being slightly fat and obese for cavies, so you will need to take extra care for those that tend to eat more than they should. Being overweight will cause intestinal problems for your guinea pig.

To prevent that from happening, you will need to offer them food with an average amount of fiber. Fortunately, bell peppers have just the right amount of fiber that will improve cavies’ intestinal organs. No one likes to be a victim of diarrhea, especially not guinea pigs!

What Are The Correct Bell Peppers For Serving To Your Cavies?

Many people didn’t know that bell peppers come in different colors – the main ones being red, orange, yellow, and green bell peppers. The color makes them easy to tell apart, and it’s crucial to serve only the ones that are adequate for your guinea pigs.

Some people even asked me can guinea pigs eat bell pepper seeds. In theory, they can eat those seeds because they don’t have any toxins inside them. What makes most people worried when discussing this is the potential choking hazard.

If your cavy eats food too quickly, I recommend not to offer them bell pepper seeds as they can choke on them. As you know, seeds are generally tiny, and although they are soft, guinea pigs can sometimes make a mistake and eat them without properly chewing them.

To stay on the safe side, don’t offer them bell pepper seeds if you aren’t there to supervise them when they eat them!

Every once in a while, people come to my place, searching for answers to numerous questions regarding guinea pigs. One of the most popular questions being, can guinea pigs eat bell peppers.

Mother Nature didn’t pull any funny tricks this time around and allowed guinea pigs to enjoy eating bell peppers adequately! And why wouldn’t they? Bell peppers have a moderate amount of fiber present inside them to keep guinea pigs’ digestive system healthy.

Cavies have a narrow vision, and that can lead to some unintentional accidents happening. Bell peppers help out even with that as it contains substances that aid to the overall vision of guinea pigs. Blood vessels of cavies will also function properly as long as you give them some bell peppers.

Be sure to remember that bell peppers come in four different colors:

All except fresh green bell peppers contain high amounts of sugar present in them. Be sure only to offer them the green ones to ensure that their blood sugar levels never rise!