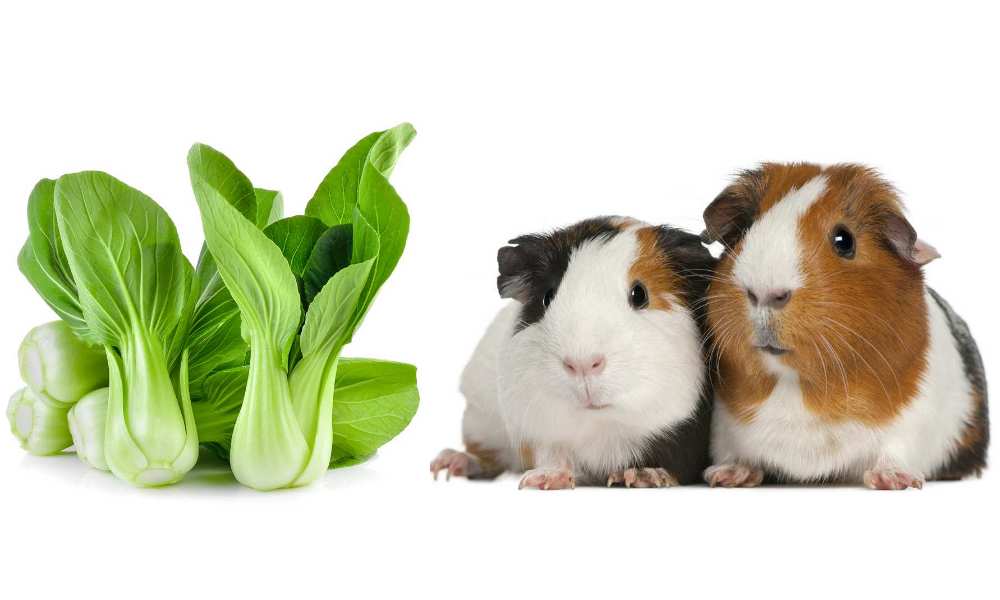 Many people pass on bok choy while visiting their local market without even knowing what that plant is. Some people who do know it came to me a couple of weeks ago asking, “Can guinea pigs eat bok choy?”. Will there be any adverse side effects if you give them some?

I was glad to inform them that it’s a perfectly safe vegetable to offer to guinea pigs, as long it’s given in moderation. The people that know what bok choy is, tend to cook it for themselves and their family members as it’s a delicious plant.

Can guinea pigs eat cooked bok choy as we can? What is the correct way to serve them to cavies? Can they eat bok choy leaves and stalks?

Many people are still stuck, not knowing even what bok choy is. I’ve assembled all the necessary information regarding bok choy and how to implement it in guinea pigs’ diet. Stick around and find out how you can do that too!

What Is Bok Choy?

You’d be surprised to find out just how much people don’t know what bok choy is. If you are one of them, I can’t blame you – before long; even I didn’t know what that was! I guarantee that,  every once in a while, as you’ve walked through the market, you didn’t even know that you’ve passed on some bok choy!

People don’t pay close attention to the veggie and fruits section of the market, and they really should. There hides a particular vegetable in the midst of all of those plants that can help out your guinea pig – that being bok choy!

Depending on where you live, the bok choy name varies from place to place:

If you aren’t in any of the regions I’ve mentioned above, as long as you stick to calling them bok choy, most people will understand you. Don’t be surprised if you catch someone referring to them as Chinese cabbage – even this name is correct and is used worldwide!

Despite all odds, bok choy is a vegetable commonly found in most gardens located in the countrysides. Many farmers opt to grow them on their own because it’s relatively easy to do so, not to mention that it’s profitable as well!

If you have some free space in your garden and think about growing them yourself, you should follow the next steps:

I grow them myself as it’s a relatively easy job to do. I’m sure that even my guinea pigs are thankful for that!

How Should You Serve Bok Choy To Guinea Pigs?

Whether you accept growing bok choy on your own or buying it from your local market, there won’t be any differences in the serving process. But, before we can talk about how much bok choy guinea pigs can eat at a time, some things need to be addressed beforehand.

Growing bok choy on your own will give you a clear insight as to where it came from. That can put you at ease as many farmers spray various toxins on this plant to prevent unwanted attention. These toxins are mainly insecticides and pesticides.

Try finding organic bok choy in your local market, as they are not sprayed with those toxins. Even if you don’t find the organic bok choy, there is still a way to serve them safely. Peel the first layer of the plant in the washing dish to remove the layer that is sprayed.

After that, wash the bok choy thoroughly to remove any specks of dust and dirt still present after peeling the first layer off. When you are done with the cleaning process, take a sharp knife and start chopping the plant into small pieces.

We generally eat bok choy as a whole, one leaf at a time. That can be too much for guinea pigs to handle, so take a single leaf and cut it in half. That will be a sufficient amount to give to cavies; just remember to provide them with bok choy only twice a month.

Guinea pigs can even eat bok choy stalks, as long as you wash them thoroughly before you offer them some. Although they are a great source of protein, make sure that you only provide them bok choy stalks that are chopped in small pieces, not bigger than your index finger.

Generally, I believe that talk is cheap, so I follow mostly the facts. You should only serve bok choy in a raw state for guinea pigs. Cooking them will make them lose most of the health benefits that it can offer to guinea pigs.

Look at the following macros of bok choy:

A keen eye will notice that I’ve not listed the sugar content present in bok choy. You know why? Because it’s nearly nonexistent! There are still minimal traces of sugar present in bok choy, but that amount is so negligible that it won’t do any harm to our beloved furballs!

All jokes aside, take a look at some of its most redeeming qualities:

Most living organisms can’t produce vitamin C on their own, and guinea pigs fall sadly into this category. Although a general guinea pigs’ diet consists of some stuff that gives them vitamin C, non of the things you can find on their menu comes even close to the vitamin C present in bok choy!

Cavies tend to get sick rather quickly if they digest something rotten or old, so make sure that their immune system is always ready to defend them! That can be done quite easily by offering them some bok choy as it has a substantial amount of vitamin C present inside them!

A Great Source Of Water

If you tend to release your guinea pigs from the cage to roam freely around your room, you should provide them with multiple sources of water. A single bowl in the cage is fine, but cavies won’t be thrilled to travel back to their cage just to drink some water!

That can be solved just by placing a couple of bowls filled with water all around the room. Still, if you aren’t so fond of that idea but want to keep your guinea pigs hydrated at all times, I propose a solution. Start feeding them with bok choy from time to time in those scorching summer days!

As you can see, a whopping 95 % of the bok choy is made of water, making them an ideal source of hydration for your beloved cavies!

Just remember to feed your guinea pigs with bok choy in moderate amounts, as giving them too much might cause some intestinal problems. The most famous one being bladder stones – a painful condition for cavies where tiny crystals are formed in the bladder.

Those are caused by the large amount of calcium present in bok choy. To prevent that from happening, make sure that you don’t exceed the amount that I gave you earlier!

Now that I’ve clarified what bok choy is, it’s much easier to answer the question: can guinea pigs eat bok choy. Many people had their fair share of doubts regarding this vegetable, as they know that guinea pigs shouldn’t eat cooked food.

Luckily for them and all of you…

Guinea pigs can eat bok choy as long as it’s served in its raw state. While we enjoy the taste of cooked bok choy, that veggie should remain only on our plate, as boiled bok choy loses its main nutritional values that guinea pigs need to find in their food.

Raw bok choy offers a significant amount of vitamin C, crucial for maintaining a proper immune system for guinea pigs. Whenever you feel worried if your cavies are drinking enough water, just offer them some bok choy as it is a phenomenal water source for them!

Stick to giving bok choy to guinea pigs a maximum of twice per month, as the calcium levels present inside it can cause bladder stones. No one likes them, especially cavies – be considerate at all times and only provide them with a moderate amount of bok choy!