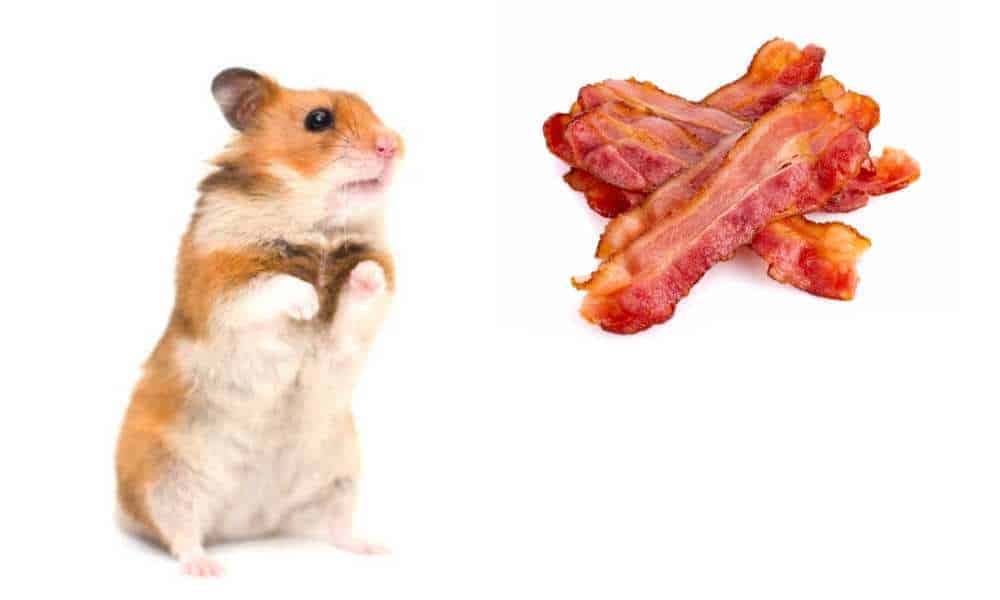 There is not much food that is as famous as bacon in the culinary world. From house chefs to professional ones all have their special recipes to prepare bacon. I bet there is a possibility you are one of them.

If you are and own a hamster (weird combination, I know) you’ve probably asked yourself can hamsters eat bacon?

Unfortunately for you and your hamsters – bacon is absolutely forbidden for hamsters. This means you’ll have to find someone else to enjoy your tasty bacon with you and be an unbiased judge of your recipe.

In order for you to understand why feeding your hamster some bacon is a horrible idea, you’ll need to learn a thing or two about bacon itself. Don’t go anywhere else because you’ll learn everything there is on this topic by just scrolling through this article in no more than just a few minutes, so just keep reading!

Bacon – What Is It Actually?

There are a few types of bacon. Some enjoy the original bacon that comes from pigs, and some others enjoy alternatives such as turkey bacon. There isn’t a huge difference in taste, but there is in calories. I presume you’re here because you are interested in traditional pig bacon, and that is why I present to you the table which displays all the nutrients found in pig bacon:

When you look at this chart one thing pops up – SO. MUCH. FAT.

This is precisely the reason why bacon is not a viable option when you’re looking to expand your pet’s menu. Hamsters are quite sensitive to foods that are high in fat (especially this high). This is because their metabolism mostly relies on protein and fiber.

But fat is not the only reason why not to feed your hamster with bacon. There are a few more, but be patient and you’ll learn all about them if you keep reading. In order to get a better grasp of why these ingredients are not suitable for your pet, let’s take this table apart and see what every ingredient, one by one, can do to your hamster if you decide to give it a piece of bacon.

417 Calories per only 100 grams of bacon is way too much. It’s too much if we’re talking about human nutrition, let alone a hamster one. It goes without saying that 100 grams of any food are too much for your hamster, but bacon is especially dangerous because your pet’s body isn’t used to dealing with such a high caloric count.

This is the second biggest reason to avoid feeding your hammy bacon, alongside the enormous amount of fat found in this food.

As I have mentioned above, this is the single biggest reason not to give this food to your hamster. Fat is extremely “heavy” for the stomach of the consumer, especially if that consumer happens to be your pet.

Foods that are low in fat are recommended for hamsters, and bacon is everything opposite of that. Even pellets and store-bought hamster food tends to have low fat percentages. High cholesterol that is caused by the extensive amount of fat is a serious threat to your hamster’s well-being, especially for their cardio-vascular system.

If you continuously give your pet bacon (or any type of fat-rich food) you will seriously shorten their life span without any questions.

Polyunsaturated fat and monounsaturated fat are the two “healthy” fats. This means that if you find them in other foods it’s fine, but when they are surrounded with this much unhealthy fat, it doesn’t even matter that they have some positive effects.

Carbs are the primary source of energy for any living being. This is something that the majority of people forget because they think of chocolate, bread, or pasta when you mention carbohydrates.

There is nothing wrong with giving your pet foods that are rich in carbs, but you need to acknowledge that carbs are also responsible for gaining weight and damaging your health if you take them in too big of quantities. This also goes for your pet, especially because hamsters are much smaller than people, so they can get fat much faster.

I remember when I carelessly fed my first hamster when I was a kid, only a couple of weeks was enough for my hammy to get too big to move properly. Luckily there were adults besides me to tell me to stop, but if you don’t have anyone to tell you when enough is enough, I’m here to fulfill that duty!

Unlike carbohydrates, with protein people do the complete opposite. When someone hears this word they automatically think something good. This isn’t an inherently wrong stance on protein, but you have to remember that protein has to be mixed in with other ingredients in order to be effective.

When you have such a high dose of fat in a particular food like it’s the case with bacon, the protein doesn’t matter that much because the fat levels make it useless. There are a million better ways to help your hammy get its daily recommended protein intake than bacon; it is probably on the last spot on the list of foods that are good for protein.

Water retention and muscle tissue regulation are probably the two biggest reasons to enrich your hamster’s menu with potassium-filled foods. Bacon does have a decent amount of potassium in it, but it’s the same story as it was with protein. When you have that amount of fat surrounding the potassium, it’s better to find an alternative.

Don’t be mistaken, if you (as a human) eat bacon, the potassium will come in handy, but that is just because you are big enough to ingest that amount of fat – and your hammy isn’t.

This is the second most represented ingredient in bacon, right after the fat. The amount of sodium found in bacon is astonishing, but the question is is it worth it the risk of your hammy living drastically shorter than it should?

Normal fluid balance and nerve & muscle function are important but not important enough to the point where you would let your pet eat bacon just so it can get the sodium intake that it needs.

What To Do If Your Hamster Ate Bacon?

If you’re having your breakfast and your hammy is roaming free so the small piece of bacon falls on the floor and your pet gets a hold of it, it’s not a big deal.

Also, this goes just if this happens once or twice, otherwise I’d recommend you either be more careful with your breakfast or lock up your hamster while having the first meal of the day.

But I digress – if this happens there is nothing much to worry about. A small piece of bacon that your hammy will devour with such speed you have never seen before will do nothing bad for them in the long run.

They might experience some bloating or constipation, but I doubt this will happen if the amount of bacon is small enough. As for intentional feeding of your hammy with bacon – it’s not only not recommended, it’s forbidden!

If your hamster gets bacon regularly, it will clog up its vascular system and there is a big chance you will have to say goodbye to your beloved pet well before that is meant to happen. Don’t play with foods such as bacon when feeding your animal, nothing good will come out of it!

If you see your hammy having difficulty moving around or you see it becoming extremely lazy right after you’ve seen it eating a piece of bacon, I’d recommend giving your hamster’s vet a call and consulting with them. It might be nothing, but it also might be something wrong. That is why you should always consult with professionals and not make decisions on your own.

I think the answer to the question of can hamsters eat bacon is pretty clear. In case you didn’t get it from the article, I’ll emphasize it one more time:

Hamsters should never and under any circumstances be fed bacon! You might be sad about this because you wanted to share your favorite breakfast with your furry friend, but trust me – you are doing them a favor if you skip this one.

Truth to be told, there is so much better food in this world that you can share with your hammy that you should forget about bacon (raw and fried).

So in the end, I recommend you find some better options and stick with them, because bacon should be on the no-no list alongside coffee, sweets, and alcohol as far as your hamster goes.