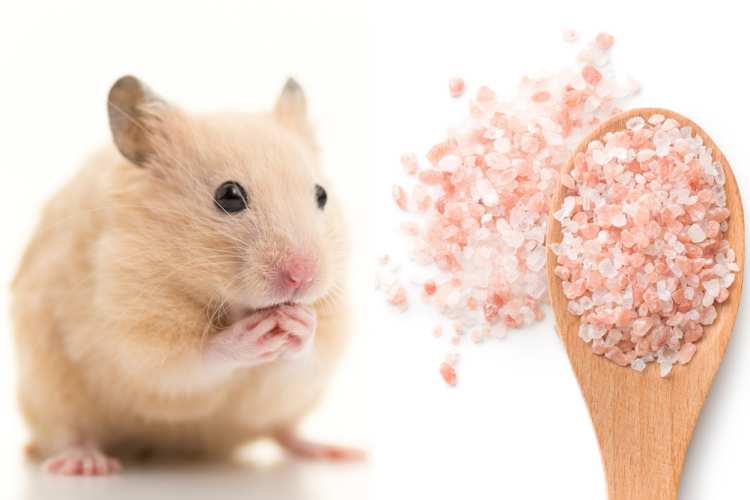 All too often, we find ourselves in situations where we’d like to give our hammies a certain food, but we don’t know if they can handle it. It is usually a snack that we ourselves enjoy, and that’s always close at hand (e.g., potato chips, peanuts, bread, etc.).

What do most of these foods have in common? Salt. This leads us to the question: Can hamsters eat salt? Should we feed them anything that contains salt?

If you’d like to find out the answer, I suggest you read the following article!

The short answer would be: NO. Hamsters cannot eat salt. It’s terrible for their tiny bodies, and consuming too much may even have a fatal outcome. When a hamster eats salt, it creates a number of problems in its organism. It sucks up the water from the body and leaves the little fuzzball dehydrated.

Yes, you read that right – salt can kill your hamster.

Aside from that, salt puts an immense strain on the animal’s kidneys which may lead to kidney stone formation. The latter occurs due to a lack of water in the organism, which renders it unable to dissolve minerals.

I’m not trying to freak you out here, but that’s just how it is.

An important thing to say is that the above-mentioned scenario happens only when a hamster ingests a large amount of salt. A bit of salt probably won’t hurt it too badly.

So, how much is too much?

It’s difficult to say as there’s no clear data on this. That’s why it’s best to avoid salt altogether!

What To Do If Your Hamster Ate Some Salt?

If your little buddy happened to munch on some salt, do not panic. It doesn’t necessarily mean that it’s doomed. The latter, of course, depends on the amount that it ate.

Let’s hope that the hamster didn’t consume too much. What you should do is go and get a watery vegetable, like a cucumber, and feed it to your pet as soon as possible. If you don’t have any cucumbers lying around, a nice juicy apple should do the trick too.

The idea is that by ingesting a juicy fruit or vegetable, the hamster will get rehydrated and counter the dehydrating effects of salt. This should help a great deal!

Not All Salt Is Made Equal

Now, before I continue on my salt demonizing campaign, I’d like to talk about different kinds of salt and their effects on hamsters.

Table salt, or any kind of heavily refined salt, is by far the worst for hammies and causes the most detrimental effects. It is refined and cleared of most impurities, so it has the highest sodium content of all available salts.

Himalayan salt, on the other hand, doesn’t seem to be as harmful. It’s still bad, but not as bad. The reason for this is, of course, the lower sodium content, but also the fact that it doesn’t contain any additives.

While table salt is enriched with anticaking agents like magnesium carbonate, Himalayan salt is not, and hamsters seem to tolerate it a bit better.

What About Salt Licks?

Tying into the previous point, Himalayan salt licks are a somewhat popular product that’s being marketed to hamster owners.

If this were true, then you could scratch everything I wrote so far in this article.

But, it’s not true, and hamsters definitely do not need salt licks in their diet. They provide zero nutritional value for them and could only be useful as a toy. With that being said, let’s see how your hamster could potentially benefit from having a salt lick in their cage.

Why Get A Salt Lick For Your Hamster?

As I’m sure you already know, hamsters are highly-active animals. They’re constantly on the go and love all kinds of physical stimulation.

The latter is where a salt lick could prove to be useful. If you add one to your hamster’s cage, it could serve as a point of interest. The little fuzz would probably like to come and lick it once in a while, keeping him or herself entertained.

Before I say anything more, I’d like to point out that I only endorse Himalayan salt licks. Again, this is because they’re minimally refined and contain no additives. Such a lick is basically a piece of rock tied to a rope.

Even though these are called “licks” and are meant to be licked, some hamsters will want to chew on them. They’ll scrape off some salt from the rock and – you guessed it – eat it. This is why you need to keep a close eye on your pet when first introducing it to a salt lick. If it starts biting on it, it’s best to take it away from them.

Can Hamsters Be Salt Deficient?

Yes, as a matter of fact, they can. However, this doesn’t mean that they need salt added to their pellets or salads. A sodium deficiency implies that you may have been feeding your hammy an imbalanced diet.

Similar to people, many hamsters’ health issues can be solved by changing the way they eat. To learn more about this, check out the upcoming section.

How To Make Sure Your Hamster Gets Enough Minerals?

We, humans, need a bit of salt in our diets as a source of minerals. Hamsters do not. They get all they need from a well-balanced diet. OK, so how does a well-balanced hamster diet look like? What foods should you be feeding it?

A good muesli mix should do the trick and is by far the simplest solution. It should contain grains, vitamins, dried fruit, and other good stuff. If the packaging says that the product has salt, don’t worry, it’s a minuscule amount.

Are mineral chews any good?

Mineral chews are another product that’s being promoted as essential when, in fact, it’s not. They barely provide any nutritional value to a hamster’s diet and should be regarded as a chewing toy at best.

Speaking of chewing, it is crucial for hamsters to gnaw on hard things to keep their teeth healthy. Mineral chews are a decent choice for this purpose, but there are many other options available.

You can find plenty of chewing toys online, but my advice would be to keep things as natural as possible and get your hammy a piece of wood. What kind of wood? Wood from fruit trees is an excellent choice, but premade chewing sticks are an OK too. Read more about this topic here.

Foods That You Should Be Feeding To Your Hamster

If you’d like to give your hamster something other than boxed food, here are a few good options to make sure all their mineral and vitamin needs are met.

Nuts and seeds are a great source of nutrition for hamsters. However, these foods should be given to them in moderation, and they (obviously) must be unsalted. As little as one almond or peanut per week is more than enough for a hamster of any size. Giving them more than that would be counterproductive.

When it comes to vegetables, greens are always a good idea. Think spinach, kale, and broccoli. Aside from vitamins, these veggies are loaded with fiber, something that hamsters need badly.

Hamsters love to munch on dried fruit, and the lucky coincidence is that these foods are full of important nutrients for them. Tofu is an unlikely but great option for hamsters too. Again, make sure that neither the tofu nor dried fruits contain salt, sugar, or any other flavor enhancers.

The line above implies that our nutritional needs and those of hamsters are pretty similar. We’re both omnivorous species and require a varied diet to achieve and maintain optimal health.

If someone you know wants to lose weight and improve their health, telling them to “eat like a hamster” would be legit advice!

Just like hamsters, we, too, should avoid consuming too much salt and sugar. Of course, we can tolerate a larger amount since, well, we’re much bigger, but these tiny white crystals often get the best of us.

OK, this was a long answer to a very simple question. However, I think it is essential for you to get a deeper understanding of why hamsters shouldn’t eat salt, and I hope I provided you with the explanation.

All in all, stick to hamster-friendly whole foods, and your furry friend will have a long and prosperous life!