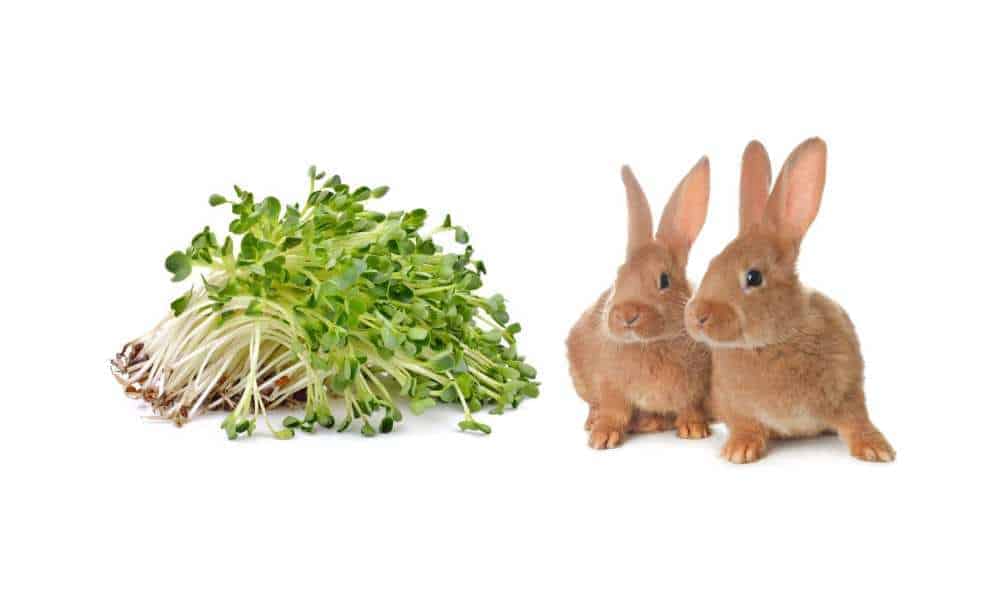 Let’s take a minute and dedicate it to the rabbit’s diet and one specific ingredient – alfalfa. Have you ever tried to give this to your rabbit? Should it have some or not?

Alfalfa is a species of plant that has been cultivated around the world and is of great importance. In addition to its already well-known cultivation, it can also have a purpose in nutrition.

So, can rabbits eat alfalfa?

Of course, they can. This is an edible type of hay, just like many others, but it is essential to pay attention to some details. To find out in what quantities, how regularly, and many more interesting facts related to the nutrition of your rabbit, do not go anywhere!

Alfalfa is a somewhat broad term when it comes to the rabbit diet. We would need to “dissect” this plant into several parts.

Yes, rabbits are certainly allowed to eat alfalfa hay. However, although this is a nutritious type of hay, 2-3 times a week will be enough.

To further enrich your rabbit’s diet, you can mix this hay with other foods – preferably fruits and vegetables.

When it comes to hay, two things should also be noted:

Alfalfa pellets are made from alfalfa hay, and they represent a good treat for your rabbit. However, just like with hay, you should limit the intake of hay pellets to 2 times a week.

Pellets are a great source of the needed protein, vitamins, and minerals that are missing in your rabbit’s diet. Here are the situations in which you should specifically turn to alfalfa pellets:

There are also many commercial store-bought versions of alfalfa pellets. You can find them in your local fodder shop.

The last question would be:

Just like the previous two, your rabbit can eat this one as well. The same goes for the recommended number of times to feed them – 3 times a week would suffice.

People often argue between alfalfa hay and alfalfa sprouts – which one is healthier? The truth is that both of them are incredibly healthy if you cultivate them in the right way.

When it comes to serving, the methods are pretty much the same.

With alfalfa hay, you don’t have to do much washing because the plant is already dried up. You just have to double-check it for some bugs or other pesticides that could find their place there. Sometimes, you might have to chop them in half because they are too long.

With alfalfa pellets, the store-bought version is already taken care of. You just need to pour the right amount into your rabbit’s bowl and watch it enjoy its meals. On the other hand, if you picked the pellets yourself, you would have to wash them a couple of times.

The same goes for alfalfa sprouts. If the plant is not dried or a store-bought version, you are expected to wash it thoroughly and check for any potentially dangerous content on the plant.

Don’t skip the cleaning part. This will only take a couple of minutes of your time, and you will save you and your rabbit the unwanted consequences that might happen if you were negligent.

Alfalfa Hay – From The Fodder Shop

Note: Alfalfa pellets are not the only store-bought version. You can even go and buy high-quality alfalfa hay. Here are some brands you can choose from:

Just like with alfalfa pellets, this type of store-bought rabbit food is recommended especially for pregnant rabbits, baby rabbits and those that are recovering from some type of health issue.

If you are cautious with your alfalfa, and you serve it to your rabbit occasionally, you could expect some major benefits from this nutritious plant like:

Too Much Alfalfa – Possible Consequences

What if your rabbit had too much alfalfa? It turns out that there are indeed some consequences. So, what are they?

Alfalfa is too strong for a rabbit that has a weak immune system. You should check if your rabbit is healthy enough to consume this plant.

Too much alfalfa can cause diarrhea in rabbits. Although this is an easily digestible plant, having too much of it can provoke stomach issues. The symptoms of rabbit diarrhea:

If you notice any of these, you should take your rabbit to the vet. Don’t wait for the symptoms to get worse.

If you haven’t cleaned the alfalfa sprouts or pellets carefully, your rabbit can end up getting food poisoning, and this is a serious matter.

You should always check your rabbit’s appearance and mood after it’s done with eating. Look for any signs of displeasure. If your rabbit is avoiding eating other meals, something’s definitely wrong.

That’s a red flag saying that your pet needs a professional’s help.

Regular appointments at the vet will save you a lot of trouble. Also, if you are unsure about your rabbit’s nutritional requirements – always ask!

Alfalfa hay is undoubtedly not the only hay out there that can find its way on your rabbit’s diet. There are also other healthy alternatives like:

Let’s start with the former. Bermuda hay is a season grass that’s primarily cultivated in the South of the USA. This type of hay is already a well-known food in a horse’s diet, but there’s no reason for your rabbit not to have some.

These herbivores also enjoy munching on this crop. But how healthy is this actually?

Bermuda hay is a great occasional treat for your rabbit. You can mix it with the main meal of some other vegetables a couple of times a week. Consuming this type of hay can help your rabbit’s skin, good cholesterol levels, and the digestive system.

Some owners argue that timothy hay is the healthiest choice because of its high fiber levels. This is indeed a benefit, but too much fiber can disrupt your rabbit’s dietary needs. It would be best if you were careful when introducing this hay because it’s got a strong composition.

Since hay was a topic today, it would be essential to find out some interesting facts about it that can help us better understand this crop.

1. Bales of hay can combust when they’re exposed to moisture.

Although this sounds strange, if hay is exposed to too much moisture during the time of bailing, this increases the chances of microorganisms developing. This can affect the hay’s quality, and it can become a fire hazard really soon.

Accidents like this often happen after a rainy season. That’s why you can see people covering hales with large plastic fabric – so that it doesn’t get wet.

2. If you harvest hay too late, it can lose its value (nutritional + digestive).

People who wait too long to harvest their hay increase the risk of that same hay losing its nutritional value. What’s more, it can become stiff and hard to digest.

3. Hay spoils because of weather conditions.

The most common reason for the spoilage of hay is unstable weather conditions. Sometimes, protection in the sense of coverage is just not enough. The cold pretty much does its part.