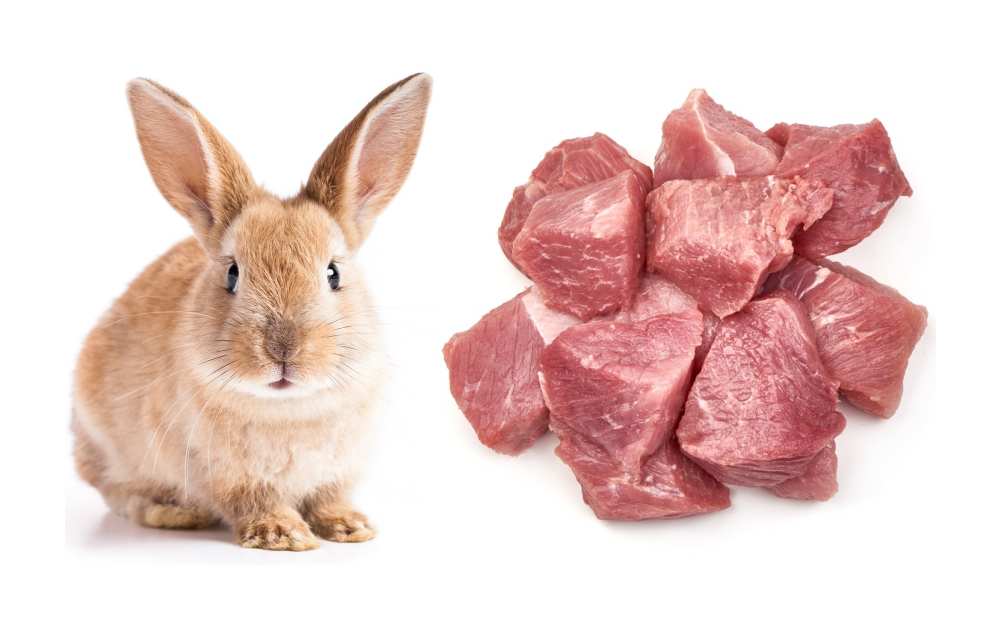 You recently became an owner of a cute domestic bunny, and now you’re figuring out what you can and can’t feed your pet. Are meat products on your bunny’s food list or not?

A list of foods that your pet rabbit can eat is pretty long, but it’s restricted in the sense that it mainly covers leafy greens. This brings us to the question – can rabbits eat meat, or are they entirely herbivores? You might want to put away the meat leftovers you got in your kitchen.

Continue scrolling down and find out how meat products go with your rabbit’s dietary needs and are there something you should know about before feeding your pet rabbit some chicken nuggets leftovers from lunch.

Can Rabbits Eat Meat? A Loud and Clear ”No”

Sorry, but your rabbit’s stomach is not able to process meat products of any kind. This food can cause all types of health issues, but we’ll get into specifics later. For now, let’s start by saying that rabbits have been and always will be – herbivores. This simply means that their diet is based on plants and plant-based products.

The enzymes in your rabbit’s stomach are accustomed only to a plant-based type of nourishment and will have trouble in processing and digesting anything stronger. This includes sugary products, fizzy drinks, fast food (hamburgers, cheeseburgers, french fries, etc.)

Meat is a broad term, and includes a bunch of different products, so let’s get into explaining what consuming each of them means for your rabbit.

Chicken meat deserves its first place on the list thanks to its widespread culinary use and practicality. But this doesn’t justify its position on a herbivore’s diet. That’s right – your rabbit might enjoy the smell of leftover chicken nuggets, but it shouldn’t get near it.

Chicken meat is hugely caloric, and almost every part of the chicken’s body is edible. Let’s take a closer look at some facts.

Let’s say that you prepared 100 grams of chicken meat; this means that if your rabbits get their paws on these leftovers, they will ingest tons of calories. Depending on the part of the chicken, it’s like this:

If you look at the numbers, they are pretty big, and you’re dealing with a small-sized animal. These two don’t go together at all. Now, what are some disadvantages of chicken meat?

First, let’s start by saying that animal slaughter is simply horrifying, and we here care about animals more than anything. Every year more than 9 million poultry are slaughtered and used for culinary purposes.

Slaughter sometimes involves spending time in a filthy environment. And even if human hygiene is okay, we still have the animals – almost 97% of chickens are contaminated with some type of bacteria. Sadly, this issue is often overlooked, and contaminated meat is forwarded into sales – causing food poison in both humans and animals that consume it.

Another thing that’s extremely concerning in relation to chicken’s insides is that these animals contain cancer-causing arsenic. Research has found traces of this poisonous chemical in the chicken’s DNA, and since it’s in there – there’s no way to get rid of it.

Slaughtering chickens also has a devastating effect on the environment – nature in particular, and this is where your pet rabbit spends most of its time. The last thing you want is for your pet rabbits to come across some polluted leftovers from previous chicken slaughter. You should keep your pet’s environment as safe as possible!

Lastly, the risk of developing an antibiotic-resistant bacterial infection is something Veterinary Medicine is still trying to grasp fully. We know that chickens are given vaccines not long after they have hatched from the egg, which protects them from infections. However, these vaccines have proven to cause more harm than good.

Consuming meat from chickens that were “unsuccessfully” vaccinated can cause quite the unpleasantness in the stomach area. Most commonly, these things lead straight to gastrointestinal problems. Just imagine a small-sized rabbit going through something like this.

One other thing – never, and we mean NEVER feed your pet (rabbit) raw meat – that’s just not acceptable!

Chicken meat might be rotten, but chicken meat that’s passed its expiration date is twice as bad. To avoid situations like this, how do you tell if your chicken meat has gone bad?

You are looking at three options: your nose, touch, and color.

The most natural resource would be your nose – try smelling the meat and see if it has that strange strong smell to it. If so, it’s time to hit the trash can!

TIP: rabbits can also smell and detect bad meat, so don’t push them into eating it.

If you have trouble with your nose, you can always rely on your touch – your meat shouldn’t be rock hard, but it also shouldn’t be too squishy either. In fact, never feed your bunny meat just because it’s squishy – it’s not a good sign!

Lastly, the color of the meat will surely reveal if it’s still good for cooking or not. If your meat has that pink, reddish color – it’s good to go. But if it appears to pale or has any gray dots or even some orange spots on it, you should definitely throw it away.

People have the habit of feeding their pets cooked meals that are not edible anymore. For example, you should not provide your pets cooked chicken meat that you didn’t eat – it’s just going to mess up their metabolism, and remember – rabbits can’t vomit!

Thanksgiving and Christmas are a time when the consumption and the preparation of turkey meat considerably increases. People often prepare too much during holidays, and there happen to be too many leftovers. So, where do they go – do we feed them to our pets?

If you’re thinking of feeding your rabbit Christmas turkey, think again! Your pet rabbit is not allowed to have any turkey meat.

Turkey meat can be added to various dishes. You can include this meat in curries, soups, sandwiches. But the most important is the turkey prepared for Thanksgiving dinner. Prepared like this, it’s even more caloric and therefore more dangerous to your pet.

Turkey meat usually has a stronger taste because of all the homemade sauces and additives that are included in it, but what would happen if you gave turkey skin to your rabbit? Well, it would cause a heart attack right away – just look at the number of calories!

The biggest drawback of turkey meat is that it is too strong for your rabbit to digest. For example, dark turkey meat is too high in cholesterol levels that promote fat. This contributes to weight gain, and since your rabbit’s stomach is not able to digest it – all it would do is cause bloating followed by nausea.

Turkey meat is also not recommended during pregnancy. This also goes for animals. Feeding your rabbit turkey while carrying cubs can cause food poisoning, even instant death in the form of heart failure.

Too much turkey skin causes the feeling of sickness. And while humans have a way of dealing with this, small-sized animals like rabbits are not given too many opportunities. They can’t vomit, and therefore holding this toxic food inside the organism is torture for these animals.

So, we advise you to be smart and not let your rabbit get near this strong holiday dish – it will not enjoy it as you did!

We all love to have some beef steak – who doesn’t? However, we shouldn’t forget about just how strong this meat can be. Just like we should pay attention to the intake, we should also pay attention to where the rest goes – hopefully not in your rabbit’s food bowl.

Your pet rabbit might find his way to some beef leftovers and sniff some pieces in the kitchen, but it shouldn’t have!

Just like chicken and turkey, this is strictly forbidden!

There are several types of beef steak preparation, and they all differ in their nutritional value:

As you can see, every type of beef is loaded with calories that barely bring any benefits. Don’t let the delicious smell fool you – this should not be on your bunny’s meal for the day!

Unfortunately, beef holds more disadvantages than you know. For example:

Cooked beef steak can sometimes be so strong that it can automatically trigger a heart attack. The chances are even higher for small-sized animals with a weak immune system – rabbits included.

In some milder cases, consuming beef can mess with the digestive system. These chunks of meat are not that easy to process.

According to research, excessive consumption of beef steak promotes the development of cancer cells. So, if your rabbit has had a bite or two of this meat, it would be best if that didn’t happen again.

Beef can also cause joint pain, which is especially dangerous for miniature animals like rabbits since their bone structure is already vulnerable.

Some types of beef are contaminated with bacteria or pesticides, and that can lead to skin progress. If your rabbit is experiencing some redness, rash, or even hair loss – maybe it’s been tampering with meat leftovers.

You will also be able to determine whether your pet rabbit has been eating beef leftovers if you notice an unpleasant odor. When it’s time for your rabbit to take a bath, stop for a second and try relying on your nose.

Most importantly, beef is the type of meat that increases body weight the fastest. Being packed with calories and fats, your rabbits are likely to double in size in a couple of weeks.

In general terms, rabbits are not cannibals. However, there are a few instances that suggest otherwise.

The first one would be the indication that rabbits tend to eat their excrement. And yes, this is true in some cases, but there is an explanation for this occurrence.

Rabbits eat their own feces because it contains tons of proteins. As weird as it may sound, this shouldn’t confuse you. The exact term for this is “cecotropes” – feces created during nighttime.

They come from regular food that your rabbit has eaten and digested during the day, they come out during the night in the form of a normal stool, and your rabbit eats them again in the morning. They are actually high in protein and nutrient-based.

While signs of eating their own stool is a bad sign for many animals, with rabbits it’s the opposite. Although you might be disgusted by this, you shouldn’t prevent them.

Another indication of rabbits being referred to as cannibals is connected with eating their own cubs. This is, of course, the mother’s doing. Why do they do this?

It can happen if the mother gets confused and thinks that her babies are actually the aftermath of the birth. If you have a female rabbit, it’s bound to happen once.

It can also happen if the rabbits are stillborn. This is actually very common for wild rabbits.

Other reasons include the rabbit being frightened for their cub’s lives (also common for wild rabbits), and nutrient deficiency. The second reason is less common because it involves tough cases of food shortages.