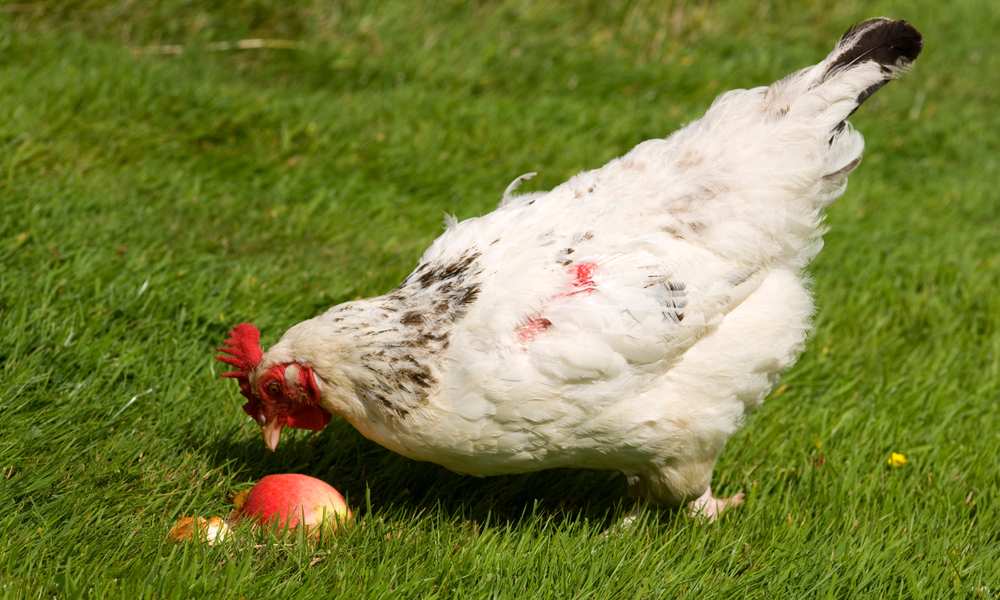 You have an apple tree in your yard, and you want to know if your chickens can enjoy those sweet apples.

Well, surprisingly, the answer is simple but with some serious caveats.

Don’t worry, though, this article has all the information you need to keep your chickens safe and healthy.

Yes, chickens can eat apples; in fact, most chickens love apples. Does that mean you can throw dozens of  apples in the middle of the yard and let your chickens go to town? No, it does not. Some parts of an apple can be harmful to chickens; read on to find out which ones.

Apples – The Not So Forbidden Fruit

Apples are an extremely popular fruit, and for a good reason as well.

One thing that we have to clarify; apples aren’t the forbidden fruit. No exact fruit was mentioned in the Bible or the old testament, to be more precise.

The fruit was unspecified, and apples just got the wrong end of the stick and were chosen randomly by some painter who clearly had something against apples.

Apples are members of the Rose family; fruits such as plums, pears, cherries, peaches, raspberries, and strawberries are all members of this “edible” family.

Kazakhstan is where the apples originated; the first apple Malus Domestica can still be found there.

Alright, with that quite interesting information out of the way, let’s look at something concrete, the apple nutrition chart.

Apples are basically carbs and water. They have quite a bit of simple sugars in them, but those sugars shouldn’t harm poultry in any way.

Apples are also rich in fiber and vitamins such as Potassium and Vitamin C.

Although we don’t recommend giving everything that you eat to your chickens, we believe apples are a good choice.

Apples have antioxidants that have been proven to improve the health of both humans and animals; these are:

So it’s safe to say that apples are just an overall good fruit.

Domestication of chickens began 2000 years ago. Today, there are over 350 “combinations” of chicken. In the 19th century, the American Poultry Association was organized in order to classify the different breeds. Two types of chicken industries evolved, the purebred poultry industry and the commercial industry.

In the beginning, they were quite close to one another; however, now, the commercial industry has evolved beyond recognition. The purebreds are the same as they were 100 years ago; the commercial side is now literally a science-based ordeal, aiming to create a chicken that yields the most both in terms of meat and eggs.

It’s easy to imagine then that the diet for these is, most of the time, quite different. However, one thing they have in common when it comes to food is the things they can’t eat. Things like sugar, raw meat, raw, eggs, junk food and certain types of fruit should be avoided at all costs.

Cyanide is a deadly chemical that is highly toxic to chickens.

The most obvious way for cyanide poisoning to occur is by having chickens expose to fumes from a fire. However, cyanide poisoning may also occur through consuming food and plants that contain cyanogenic glycosides or just plain cyanide.

Cyanide works quickly and can cause death in a matter of minutes. If a chicken gets cyanide poisoning, the hemoglobin in its blood called oxyhemoglobin is unable to release oxygen, and the chicken becomes hypoxic.

The amount of cyanide varies from plant to plant. Spring is the most dangerous time of year when it comes to cyanide, as this is when everything is in full bloom.

Drought and dry conditions in general can also cause an increase of cyanide in plants.

A person who weighs 154 lbs would have to ingest 1-2 mg/kg of body weight of cyanide for it to become lethal, which is around 40 apples or 200 apple seeds.

We highly doubt anyone eats that many apples a day. However, for a chicken, a lethal dose of cyanide is 11.1 mg/kg. That is a lot less, and even though one apple probably won’t do much harm, we highly recommend you remove the seeds before giving apples to your poultry.

Hopefully, you won’t ever have to use this information, but we’ll provide it to you anyway.

Signs of cyanide poisoning are:

If you’re feeding your poultry apples, you might be tempted to remove the skin/peel of the apple. There are certain cases where this would be an intelligent thing to do, but we don’t recommend doing it in general. The peel contains phytonutrients that help prevent cancer.

However, if the apple isn’t organic and has enough pesticides on it to kill an ant colony, peeling off the apple’s skin would be a good idea.

If you can, buy organic apples. Dried apples would be highly recommended, although they are a bit more on the expensive side. You can dry fresh apples in the oven if you want to save some money but still have your poultry eat high-quality food.

Just to reiterate, apple peel/ skin is healthy both for humans and poultry as long as it doesn’t have any pesticides.

If you want to go that extra mile and prepare something special for your girls, these are the recipes we propose that chickens adore.

Similar to the previous one, without the freezing and slicing part. Core an apple, then put peanut butter and anything else you want or have in there. It could be almonds, raisins, dried cranberries, or even sunflower seeds.

Just make sure everything is as organic as possible, and try to avoid peanut butter with a lot of sugar in it. Homemade would be the safest bet.

This one is the simplest one. Core a few apples and then have them hang from a rope for chickens to peck at when they feel like it. It’s a relatively simple solution but one that involves the least work as well.

Just remember to remove the seeds to avoid the potential unpleasant situation we discussed earlier.

Chickens can eat apples; they like it as well. Fruits, in general, are the closest thing to candy chickens can experience. Just keep in mind that the seeds can be poisonous if eaten in large quantities and that you should do your best to avoid that.

But all in all, we don’t have anything against your girls satisfying their sweet tooth by eating some apples and apple treats.