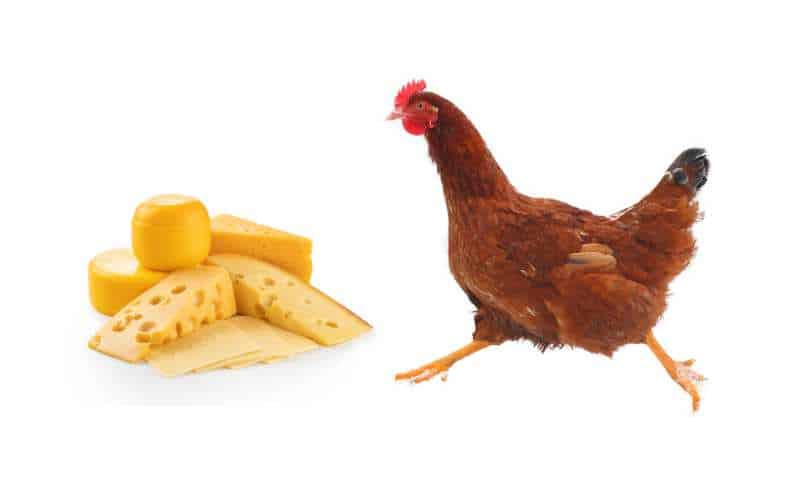 Keeping the flock healthy is the number one priority of any chicken owner. Because of this, we all try our best to do the proper research in order to figure out what our chickens can and can not eat. We are what we eat – and so are our chickens.

The food they consume dictates if their bodies are healthy and properly working.

There are many kinds of food you can get for your chickens, but we thought it’s best to take a look in our own fridges for inspiration.

So, after a good look around, we got to thinking – can chickens eat cheese? We often have cheese in the house, so it’s a valid question to ponder over as a chicken owner.

Worry not! We did the hard work; all you have to do is sit back and read on!

To put your mind at ease, we’ll give you the straight answer right away – YES, chickens can eat cheese. Not only that, it’s pretty healthy for them.

Now, that doesn’t mean that it should be their main food source. Don’t get us wrong; its nutritional values are well balanced – but you can’t really live on it, and neither can your chickens!

Consider cheese to be a healthy snack, as far as your flock is concerned. Don’t overdo it with the amount but always have it on hand – your chickens will appreciate it!

We’ll get into why you shouldn’t feed them too much in a moment, but for now, know that it’s a perfectly safe and healthy snack.

Now, we can’t say that every single cheese is going to be a healthy option. That’s not only a rule for chickens but for us humans, too.

The problem is a combination of the fact that no animal REALLY tolerates lactose from milk, and there are many unnecessary additions to store-bought cheeses.

Don’t worry; you won’t have to learn everything you can about cheese. A simple crash course will do.

So, what do we mean when we say the word additions? Well, we’re aiming at unhealthy nutrients that make cheese tastier for us. Think sugars and artificial sweeteners.

But hold on, there’s added sugar in cheese? That’s ridiculous! We know it is, but the ugly truth is that there’s sugar in pretty much everything we eat.

Sometimes that sugar is harmless, mind you. After all, it’s just a simple carb. But if you consume enough of the stuff, it can wreak havoc on your body.

And if it can affect YOUR metabolism, imagine what it can do to your chickens.

Here’s the short version of how to pick a cheese: If cheese is highly processed, it’s probably less healthy. But you have to remember that cheese processing and food processing are not the same things.

All cheese is processed. It’s made from milk, so it has to go through a transformation in order to become the smelly treat we all know and love.

The processing we’re referring to is one that’s done to things like melted cheese strips and other fake diary products. That’s right; we said fake!

A lot of store-bought cheeses are just things that are made to taste like cheese – but sweeter and more addictive.

But as long as you stick to real cheese, you and your chickens will be fine.

What Kind Of Cheese Is Good For Chickens?

Alright, so we have to get more familiar with types of cheese now to give you a good idea of what to get for your flock.

Here’s a quick rundown: Aged or dried cheese is a good idea, while you might want to skip some fresh cheeses. Also, goat cheese is always a much healthier option when compared to cow cheese.

Cow milk is rich in lactose, which is essentially sugar with a fancy name. But it’s not just the name that differentiates it; it’s how animals process the stuff.

While cow milk is excellent for, well, cows, it’s not so healthy for other animals. It makes a lot of sense.

What doesn’t make sense is why we humans decided to start drinking cow milk. But we’re glad that we did, so let’s not think about that too much.

Because other animals can’t process lactose well, cow milk can be quite hard on the digestive tract. You probably know someone who’s lactose intolerant, right?

Well, here’s a fun fact for you – we’re all lactose intolerant! That’s right, we just kind of adapted to drinking cow milk, even though there are much more benefits to some lactose-free alternatives.

Your chickens don’t have the upper hand when it comes to processing lactose. They have a pretty hard time doing it, just like us.

And because of this, it’s a good idea to go for goat milk or cheese, for instance. It’s much healthier as it has even more proteins while containing less lactose.

But here’s an important note: Cheese is much healthier than milk.

So, while your flock may not like cow milk, it will probably love cow-milk cheese! Sure, even cheese from goat milk is still the preferred option, but it’s essential to know that cheese is generally the better option in terms of dairy products.

So, what kind of cheese should you give to your chickens? Well, any kind, really!

Cheddar, Mozzarella, Gouda, Parmiggiano, Parmesan – the list goes on. Just think about the texture of the cheese, as it is the more critical factor. Fresh cheeses are soft, which can sometimes be annoying and hard to pick at for your flock.

Because of this, we recommend hard cheeses. And not only that, if you shred them, it will give a little extra element of fun for your flock!

Cheese That We Don’t Recommend

Now that we’ve covered which cheeses are good for your chickens, it’s time to figure out which ones you should avoid.

We mentioned that you should stay away from fake cheese and that it’s a better idea to stick to natural, unprocessed options. But that might be a bit hard to do if you don’t know what to look for, huh?

You probably won’t spot a packaging at the store that says “fake cheese” on the front, so let’s look at how to spot these frauds. Cheese analogue is a good start, for example.

Allow us to explain.

You might’ve spotted this phrase on packaging here and there throughout your weekly shopping. But what does it mean?

Well, these are cheese alternatives. They are usually the vegan versions of popular cheeses. Now, these are not all bad, but you need to know how to pick a good one.

It’s usually a simple task, though, so don’t worry too much.

Just be sure to check the nutritional values to see if the cheese is packed full of sugars and other unhealthy and unnecessary surprises. If you don’t want to bother with checking every label, we suggest just sticking with old-school cheese.

It’s a much less stressful shopping process; we can guarantee that much.

How Is Cheese Made?

Alright, so now that we covered which cheeses are good and which are not, let’s answer one more important question: What the heck is cheese?

We all know it’s made of milk, but how is it done? What’s the process? And most importantly, what makes it healthier than the actual milk it’s made of, anyway?

Firstly, we must mention that cheese is one of the oldest processed foods we’ve ever made as humans. For thousands of years now, we’ve enjoyed all kinds of variations of dairy products.

You can imagine that it’s not a very complex process if we’ve managed to do it a couple of thousand years ago.

And you’d be right!

The first step is pasteurizing the milk, which means that we kill off all of its unhealthy bacteria. That is done by cooking the milk for a long time on low heat. After all the harmful bacteria is gone, it’s time to replace it with a healthy culture.

Wait, what does “culture” mean here? Well, a culture of healthy bacteria, of course! That is a standard process for all dairy products – from cream and butter to yogurt and beyond.

These are all healthier dairy products, mind you. And it’s not because of the lower lactose amount – even though that helps.

What really helps is the bacteria culture that’s put in the milk. It can aid digestion and simultaneously make it easier for your body to process the lactose left over from the milk.

As a rule of thumb, the older the cheese is, the easier it will be to digest by your chickens. However, the difference in ease of digestion between fresh and aged cheeses is not remarkable.

The most crucial step that we still haven’t mentioned is the inclusion of an enzyme called rennet. That is quite an important step because it thickens the milk into curds that are later drained to actually turn the raw milk into cheese.

That’s the final part of the process before the cheeses are aged.

Can Too Much Cheese Be Dangerous For Your Chickens?

So, let’s say that you got a nice aged shredder cheese ready for your flock. You’ve separated it into smaller chunks so each of your chickens can have its own fun picking at the small piles.

You know which cheese it is and how it was made – you’re as prepared as one can be!

But there’s one more question that should get answered before the cheese gets to your chickens: How much should they eat?

We already mentioned that chickens don’t have the capability to digest lactose, so the amount should obviously stay low. But how much are we talking?

Even though there are some very healthy bacteria cultures in many kinds of cheese that help chickens with digestion, because of the lactose – no matter how small the amount – eating cheese could prove to be more bad than good for your flock.

That’s what we were talking about when we mentioned that cheese should only be used as a treat and never as the primary food source.

But that doesn’t mean that you can’t have a little fun with the preparation of those cheeses.

For instance, mixing fresh cheeses with your chicken’s usual meals could prove to be a healthy addition to their diet – provided that you don’t go overboard with it.

Still, even with these kinds of plans, we suggest you limit your chicken’s cheese consumption to maybe once or twice a week. Any more than that, and you’re risking problems with their digestive tract.

So, there you have it! We hope you got all the answers to “Can chickens eat cheese?” you were looking for today.

Cheese can be a healthy treat for your flock if you’re moderate with the amount that you include in their diet. It’s a fun treat, and they sure love the taste.

Because of this, we feel that it’s a pretty great treat. So, if you’re ever wondering whether or not you should shred up some leftover cheddar and pop it in your chicken meal – now you know.

Not only will they love it, but it will also be a healthy addition!