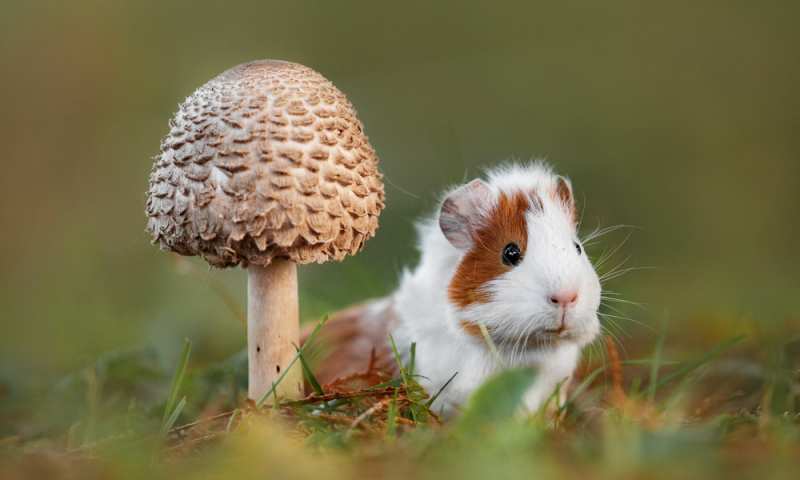 Even though many people refer to them as vegetables, mushrooms actually belong to the kingdom of fungi. You might have some leftover slices of mushrooms after preparing your favorite meal, and you thought you might give it to your guinea pig.

But then you asked yourself: Can guinea pigs eat mushrooms?

The answer is yes; guinea pigs can eat mushrooms. However, mushrooms don’t yield much nutritional value, so it’s not the most optimal food choice for your guinea pig’s diet. On top of that, some strains of mushrooms can be poisonous!

In this article, we’ve covered some benefits and potential risks of adding mushrooms to your guinea pig’s diet.

So, without further ado, let’s jump right in!

Some nutrients found in mushrooms are more vital than others. Some nutrients are deemed “essential,” while others aren’t as important – and some are flat-out dangerous.

The following list goes over the nutrients found in mushrooms concerning a guinea pig’s diet.

With that said, 100 grams of white mushroom contain:

Pros Of Mushrooms In Your Guinea Pig’s Diet

Mushrooms might not be as densely packed with nutrients like some other food choices for your guinea pig – but there are some benefits. Some of these are essential for your little friend, so keep reading.

Calcium is a mineral of concern when it comes to a guinea pig’s diet. Adult guinea pigs have minimal needs for this mineral – and large quantities can pose a threat.

Calcium is known to lead to bladder stones in guinea pigs. That occurs as oxalates bind to calcium and form stones – also known as crystals – in the bladder.

Mushrooms are acceptable in this regard since they contain very little of this mineral. One large mushroom has about 1 milligram of calcium, which is basically nothing.

So, feeding mushrooms to guinea pigs won’t contribute to this common condition.

Potassium is also a mineral of concern. The difference is that potassium is generally suitable for your guinea pig.

Luckily, we have mushrooms to provide a substantial amount of potassium, which helps to remove the risk of its deficiency.

Also, proper amounts of potassium have been found to increase the growth in guinea pigs. And that, in turn, means mushrooms contribute to adequate development and health.

Fiber plays a vital role in proper digestion. Proper amounts of fiber can aid against constipation which plays a role in guinea pig’s bloating.

Additionally, fiber is a well-known filler, which means that it will help your guinea pig retain the feeling of fullness longer. For this reason, fiber helps to reduce the number of calories taken in by your pet.

Ultimately, reduced calories can lead to weight control so that you won’t have an overweight pet!

The brain is an integral part of the body – and when the brain is healthy, its performance will improve. The B vitamins found in mushrooms can have significant benefits to the brain of your guinea pig, thus making it perform optimally.

Cons Of Mushrooms In Your Guinea Pig’s Diet

Guinea pigs need a variety of nutrients in their diet, with lots of vitamins and minerals – and mushrooms can undoubtedly be part of that diet.

However, the amount of mushrooms is where things get problematic. High amounts can pose several threats, while wild – or unknown – mushrooms can be dangerous no matter the quantity.

As we already mentioned, mushrooms are fungi – and variances between them are vast. They consist of a lot of different types, families, and kinds.

That also means that some are edible while others are poisonous, even in the most negligible amounts – for guinea pigs and humans alike.

Vets advise that guinea pigs should never be fed wild mushrooms in any shape, form, and color. Some wild mushrooms are safe to eat, but the risk is way too high, especially if you consider the limited benefits of mushrooms.

To make matters worse, it’s hard to distinguish between safe and unsafe mushrooms. For example, coprine-containing mushrooms are the type of mushroom that can be deadly for guinea pigs, while some other types of mushrooms can induce psychedelic trips.

Therefore, it’s best to keep the intake to only the common mushrooms generally considered “safe to eat,” like the white button or portobello.

Guinea pigs have considerable vitamin requirements – especially when it comes to vitamin C, as guinea pigs are prone to its deficiency. That often leads to a weakened immune system – and even fatal scurvy.

Therefore, feeding your pet foods that are rich in vitamin C sources is highly preferred.

Unfortunately, mushrooms are pretty low in most vitamins. Apart from low levels of vitamin C, they’re also deficient in vitamin A.

That’s bad news for guinea pigs because these vitamins contribute to the immune system and bone health. Feeding your guinea pig high amounts of mushrooms will likely lead to deficiency as it will get full before eating adequate nutrients.

In case your guinea pig needs more vitamins, you’ll be pleased to know that they can eat peppers – which are packed with vitamin C.

Mushrooms are generally low in calcium, which, in itself, is not a downside. However, this could become an issue due to the phosphorus.

Scientists have found that the link between calcium and phosphorus is esssential for disease prevention. As they concluded, lower levels of calcium than phosphorus in a guinea pig’s diet would lead to increased calcium deposits, also known as bladder stones.

That means that an adequate guinea pig diet should contain a bit more calcium than phosphorus to prevent bladder stones from forming. Not to say guinea pigs should consume significant amounts of calcium; that’s still a no-no.

The problem is that phosphorus is dangerous with calcium present. We’d recommend that you limit the levels of both phosphorus and calcium in your guinea pig’s diet.

Technically speaking, guinea pigs can eat mushrooms every day – but it’s not advised.

The main issue with mushrooms is that they are remarkably higher in phosphorus than calcium, a relationship linked to bladder stones formation.

However, according to vets, there are no risks of feeding your guinea pig mushrooms often.

The low calorie and sugar content mean guinea pigs won’t overeat – but the problem is that mushrooms are relatively low in nutritional value.

We would recommend you feed your guinea pig other healthier foods – alongside mushrooms. That will allow you to give some to your guinea pig while seeing no significant issues. The best approach when it comes to mushrooms is to include them as an occasional treat.

The main diet of guinea pigs consists of hay and pellets, but it should also involve some healthy fruits and vegetables.

These are some examples of foods that can provide complete nutrients required by guinea pigs:

What If A Guinea Pig Eats A Wild Mushroom?

Unlike many other animals, guinea pigs won’t notice when they shouldn’t eat something.

If you suspect that your guinea pig has eaten a poisonous mushroom, call your vet immediately.

In extreme cases, your vet might ask you to bring in your guinea pig for proper treatment. If that is the case for you, pick the mushroom your piggy has eaten and wrap it up in a paper towel so that you can bring it to the vet for inspection.

It can be rather challenging to spot when guinea pigs are sick. They have this unique skill to hide whenever they’re feeling below the weather. It’s a skill that allows them to avoid being the target.

Due to this fact, you will need to pay extra attention to your guinea pig’s behavior and routines to determine if they have ingested something they shouldn’t have.

The most common signs that your guinea pig ingested something dangerous – like poisonous mushrooms – are:

We recommend you follow your guinea pig’s eating behavior, energy levels, and stool – even if it’s healthy. It will make it easier to notice whenever one of these factors changes due to illness.

If you still don’t know what’s the answer to the question, “Can guinea pigs eat mushrooms?” allow us to break it down for you.

Guinea pigs can eat mushrooms with little to no risk. If you have some extra slices of mushrooms to spare, feel free to give them to your guinea pig.

Although it’s not recommended to feed mushrooms to your guinea pig often, they make a great occasional treat due to their specific nutrients.

Be sure not to feed your guinea pig wild mushrooms, though, since they can be poisonous. In addition, don’t overfeed your piggy on mushrooms; that can make them full – and they may not eat other foods that are more packed with nutrients.

As long as you feed guinea pigs mushrooms that are raw and safe on occasion, they’ll most likely enjoy the treat.

Don’t forget to provide your guinea pig with a proper diet with various foods rich in nutrients essential for a healthy lifestyle. And as always, if you can, ask your vet for more information regarding guinea pigs’ diets.