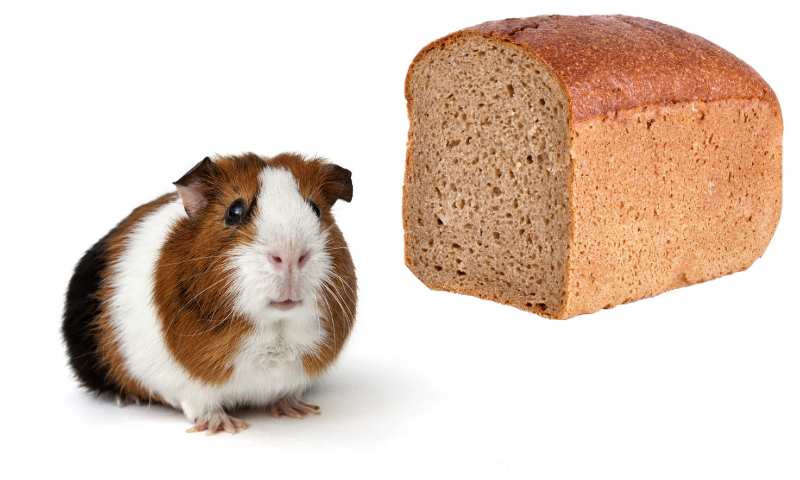 Bread is one of those staple foods present in almost every kitchen. Humans eat it daily, but surely you asked yourself: Can guinea pigs eat bread?

The answer is yes, but only a tiny amount. In general, processed foods like bread aren’t a good – or nutritious – choice for guinea pigs. On top of that, bread can cause some severe health issues.

Wait, there are downsides and potential health hazards to feeding your guinea pig bread?

Yes, and there’s a lot more to discuss there. So, let’s talk about bread’s nutritional value and the possible risks of bread consumption for guinea pigs – that, by the way, far outweigh the benefits.

The preferred diet for guinea pigs should be based on unlimited quantities of fresh Timothy hay. Guinea pigs need it to aid their digestion and to limit the growth of their teeth.

Vitamin C-fortified pellets are another excellent, nutritionally complete option for your guinea pig and should make the bulk of their diet. It’s essential to offer your guinea pig vitamin C-rich vegetables and fruits on a daily basis; they can’t synthesize this necessary vitamin on their own.

One cup of veggies per guinea pig per day should be the right measure. Kale, parsley, red, and green leaf lettuce are excellent choices. Vegetables like green or red pepper and broccoli are great daily options, too, since they are rich in vitamin C.

Remember to mix it up and provide different greens every day, though.

Fruit works just fine as an occasional treat. Due to higher amounts of sugar, it’s best to keep the portions small. A thin slice of banana, a small wedge of apple, or several blueberries are perfectly fine. Kiwi could also be beneficial in small amounts due to high levels of vitamin C.

Now that you have basic knowledge about the guinea pig’s diet, we will look at the nutritional values of bread. Since different bread brands have different nutrients, you’ll want to check the specific vitamin and mineral content label.

That said, on average, 100 grams of whole wheat bread offers:

Bread doesn’t have any exceptional nutritional values that would benefit your guinea pig. But the story doesn’t end there.

Besides commercially available pellets and hay, you want to consider other types of food to give to your guinea pig. And yes, that includes foods that we humans regularly consume, like bread.

Before you feed bread to your little friend, there are things you need to know.

Can guinea pigs have bread? Technically, yes, they can have bread. However, experts mostly agree that bread isn’t the best choice; several things could go wrong.

Then again, this is true for any other food you want to introduce to your pet.

There are a few benefits your guinea pig gets from bread that might be worth noting here. However, they should be considered in relation to the downsides.

Here, I’ll cover some of the limited benefits your guinea pig might get from bread.

Fiber, a plant mass that can’t be broken down in the body, is an essential nutrient for guinea pigs and plays a role in digestion. It can’t be digested, which sounds bad at first, but it actually decreases your pet’s chance of constipation.

Another benefit of dietary fiber is the ability to regulate how sugar is absorbed. When fiber is present, sugar is released into the bloodstream more slowly. As a result, it improves your guinea pig’s blood sugar levels – and can even help prevent weight gain.

Potassium is correlated to heart health, which is its main benefit. It helps to reduce high blood pressure, lowering the risk of heart disease or even stroke.

But there’s a catch:

Bread usually contains high levels of sodium, too. And since sodium increases blood pressure, your guinea pig won’t benefit much from the potassium found in bread.

As you saw, bread doesn’t have many benefits for your guinea pig. And now, we’ll go over the adverse effects it might have.

Bread consists mainly of wheat, which has no vitamin  C. That’s bad news, as guinea pigs have high requirements for this vitamin. They can’t produce it themselves, but they need it for their immune system to work correctly.

Be sure your guinea pig gets enough of this essential vitamin. Otherwise, you’ll put your pet at risk of scurvy. This potentially fatal condition, caused by vitamin C deficiency, can lead to joint, skin, and bone problems.

Bell peppers and parsley are great snacks that are high in vitamin C.

Bread that’s too soft and fresh can quickly turn into a choking hazard. It might get stuck around the guinea pig’s mouth and teeth, causing them to choke.

So, if you’re going to give your pet some bread, even as an occasional treat, make sure it’s not soft and chewy.

The most apparent reason for calcium being dangerous is that it contributes to bladder stones. It interacts with oxalates, which results in the formation of small crystals in the bladder. These crystals, also known as bladder stones, are extremely painful for humans, let alone guinea pigs.

As you know, bread contains roughly 125 milligrams of calcium. As for oxalates, they’re found in many plants that are essential in your guinea pig’s diet. So they’re bound to get oxalates in at any time.

If eating too much bread can lead to weight gains in humans, it can undoubtedly lead to weight problems in guinea pigs, too. The number of calories and the high fat, protein, and carb levels are too much for your furry pet.

These nutrients can lead to obesity and other health problems, making bread a poor food choice for your guinea pig.

In addition, if your guinea pigs eat bread, it can cause them to be bloated. Look if their belly is rounder or distended. If that’s the case, that build-up of gas can be a  serious problem. You’ll want to take your guinea pig to the vet to discuss treatment.

No one here wants to think about losing a pet. Unfortunately, this is inevitable, but if you feed your guinea pig too much bread, that can happen sooner than you think. And high amounts of phosphorus could be to blame.

Phosphorus is found to restrict the healthy growth of guinea pigs. Scientists agree that guinea pigs on a high phosphorus diet tend to grow slower and have shorter lives.

As you saw earlier, 100 grams of bread contains 129 milligrams of phosphorus.That’s a lot and can become an issue if you feed your guinea pig too much bread.

Bread, being processed food, isn’t found in nature. I’ve never witnessed a cavy eating bread in the wilderness – and my guess is you haven’t, either.

But it’s safe to assume that most guinea pigs would at least try a nibble and probably enjoy bread as an occasional treat.

Interestingly, guinea pigs are very sensitive to changes in their routine, including their diet. If we suddenly change the foods we provide them, they might refuse to eat or show signs of gastrointestinal upset.

In the end, the correct answer to the question “Can guinea pigs eat bread?” is:

Yes, but they really shouldn’t. Occasionally feeding tiny amounts of bread to your guinea pig – a few times a month, at most – won’t do any harm. But overall, the downsides outweigh the very few benefits it offers.

You can most certainly find better food options for your guinea pig. Always remember that guinea pigs are demanding when it comes to vitamin C. Apples are a great choice!

As for bread, make it an occasional snack.

Lastly, if you are unsure what guinea pigs can or can’t eat, be sure to talk to your local vet for advice and other concerns you might have.