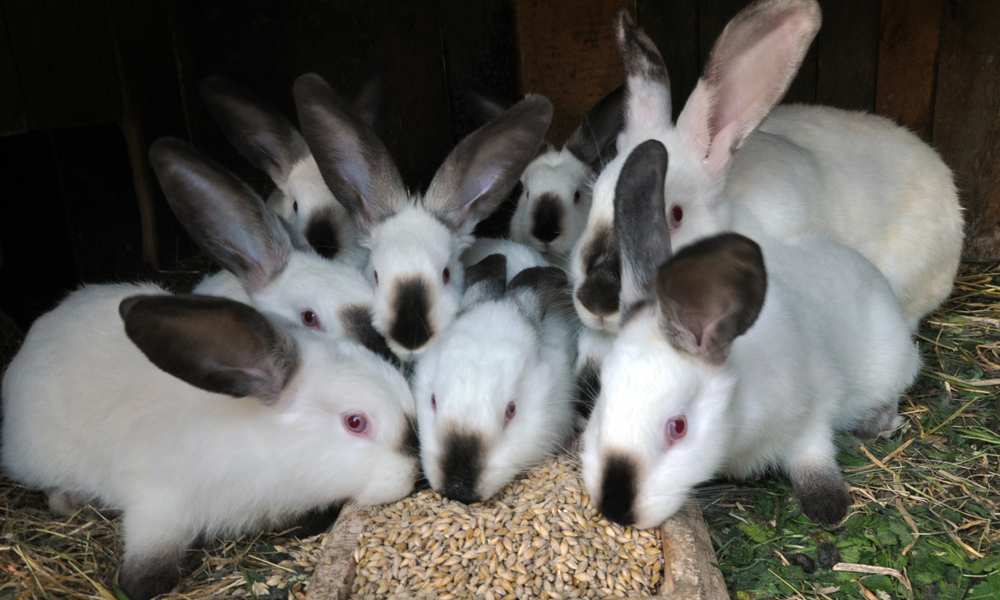 Taking care of the pet’s nutrition has to be one of the most common worries of a brand new owner. It’s not like we are sloppy or don’t care enough, but animal nutrition can be so vastly different from ours we simply take some things for granted and assume things that are beneficial for us are equally as good for our pets.

That brings us to the question, can rabbits eat barley?

Rabbits are known as a pretty hungry species, and barley is probably one of the healthiest cereals you can put on the table. They have to work together, right?

Well, the good news is that barley isn’t causing any direct harm to your long-eared friend, but you still need to take some precautions while feeding your pets.

Why is that so when rabbits can safely munch barely? Let’s try to find out.

Rabbits And Their Digestive System

Once again, we will start by taking some time to learn about rabbits, their nutrition, and their versatile but at the same time fragile digestive system.

So, our cute little furry friends are small mammals that, together with their cousins, hares belong to the taxonomic family of Leporidae. While most of them are the same size as an average cat, they do tend to swing in both directions depending on species.

Some bigger breeds can grow up to be as big as a human child. Other pygmy rabbits are no longer than 8 inches (20 centimeters). Their diet tends to follow their size and breed, so, in terms of volume, we can’t find some universal rule.

However, rabbits show much more solidarity when it comes to the content of their nutrition. Like their cousins, hares, rabbits are herbivores, which means their diet consists almost exclusively of plants of different sorts.

Contrary to the popular misconception, rabbits don’t devour tons of carrot, although this sweet veggie definitely makes it to their plate, especially when there’s nothing else to eat. But, if you could ask rabbits what they prefer for lunch, they would probably say grasses, clover, and cruciferous plants like Brussels sprout and broccoli.

Since their primary diet is severely lacking in some important nutrients, wild rabbits will also cereal grains like oats, wheat, corn, and rye.

All in all, their digestive systems are perfectly capable of processing grains, which means barley qualifies to enter your bunny’s diet. Now, let’s see whether you should serve it or not in the first place.

Why Would You Want To Feed Your Bunny With Barley?

This is a good question because, even if you have only the basic nutrition knowledge, you know barley has a rep of one of the healthiest foods you can put on a plate. So, let’s take a look at what we can find inside this popular grain and what are some of its well-known health benefits.

As we can see, stories about barley are not exaggerated – the cereal is stacked with diverse nutrients that pretty much check all the boxes off the mammals’ dietary list. What’s even better, barley contains an incredibly high level of protein that’s not always present in plants of this type.

But, the other goodies like fiber, iron, fat, and carbohydrates are present as well, and they are more than decently balanced.

Of course, going for the whole grain variety will give you access to even more protein and even more fiber hidden within the grains’ hulls.

Now, let’s see what this excellent nutritional content brings to the table health-wise:

With all this in mind, the question we should ask should actually be, why wouldn’t you want to feed barley to your bunny? Especially if the small animal is recovering from some sickness.

In the introduction, we mentioned that this awesome plant comes with a couple of important asterisks. After all, although humans and bunnies have similar nutritional needs, they have developed entirely different digestive systems.

Bottom line, what works for you may not necessarily be beneficial for your small furry pet.

How To Properly Feed Barley To Your Bunny?

Unlike other small mammals, rabbits have an unusually high tolerance to toxins. In the wilderness, they are surrounded by a bunch of very dangerous predators, so it makes a lot of sense that their hit-and-run feeding tactics leave a lot of room for mistakes.

So, barley won’t kill your pet in any circumstance. But, it can cause some horrible digestion problems to poor animals. You need to follow some basic rules if you want to leverage the barley’s health benefit and include it in the bunny’s diet.

Use Only The Pearl Barley

When we said that barley causes digestive problems to the rabbits, we were thinking primarily about the hull. Feeding the bunny with the pure grain shouldn’t cause any issues unless you go overboard. But, the various compounds that can be found in the hull are simply too much for their small stomachs.

To avoid eventual problems, use only the pure barley or clean the whole grain supply you got. Sure, you will lose some of the beneficial nutrients along the way, but it’s better than nothing.

When You Can Start Feeding Barley To The Bunnies?

Aside from the hull, which is a big deal-breaker here, we have to point out that even the pearl barley grains can prove to be harmful if the animal is too young to process the toxins within.

That is why you shouldn’t start feeding the bunny with this specific food until it grows and develops some strength. How long should you wait? Well, the bunnies are able to branch out their gourmand activities once they turn 45-60 days old. This sounds like a good time to throw barley into the mix as well.

How Much Barley You Should Give To Your Bunny?

Much like any other food you are going to feed to your bunny, barley should be used in moderation. No matter how healthy the plant maybe, if you use too much of it, you can only invite trouble.

Let’s take a look then at a couple of rules that should help you avoid these problems and get the most out of barley without causing any harm to your long-eared friend.

How To Give Barley To Your Bunny?

Bunnies like to eat barley. But, their nutrition can’t be based entirely on cereals, let alone one of them. That is why you should try to mix things up a bit.

So, there you have it. The answer to the question, can rabbits eat barley, is one big unanimous yes.

You won’t have to control the stool or gradually introduce the cereal with other more preferable foods. But, too much of everything can be harmful even if it’s a good thing and barley is no different.

Also, the husk of the grains is probably too much for your bunnies, especially the younger ones. What you should do is be kind, steam the cereals, so they are easier to digest, and keep the servings under control.