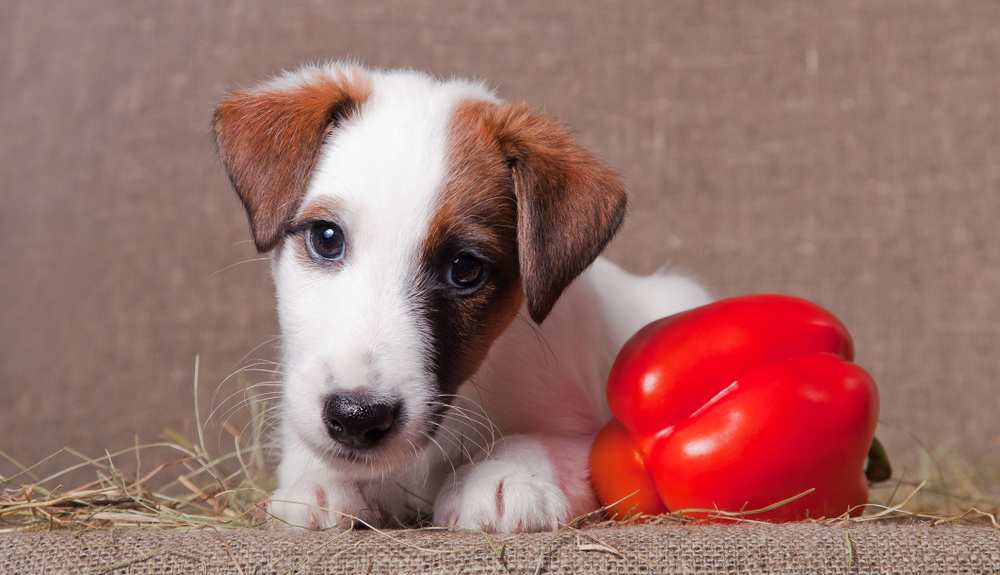 Your pup was a good boy and deserved an award – but you’re all out of treats. You look at the bottom of your fridge and see some red peppers. Whichever way you look at it, it’s a healthy snack for us humans, so it’s probably good for our canine friends. Or is it?

Sweet or hot, red peppers can be a great way to spice up your cooking. Peppers are used in a variety of meals, whether they’re chopped up or grounded. It’s hard to imagine a meal with no peppers at all. They enhance the flavor and make your lunch so much tastier! Aside from cooking, peppers can also be enjoyed raw, with or without seasonings, or as a side dish.

We all know that red peppers are filled with vitamins and other essential minerals and are generally healthy for us. Red peppers are not only vitamin bombs; they are low in fat and calories! That’s probably why moms love to slip some finely chopped ones in their kid’s meals, without them knowing. But then again, despite the fact that they’re extremely beneficial for humans – can dogs eat red peppers?

In this article, we’re going through all the dilemmas that include red pepper consumption in dogs. Are they beneficial for them, and if yes, can they snack on all types of red peppers? Read our article to find out more!

The short answer is – yes, but it mostly depends on the type. That’s why we’re writing this article. Contrary to popular belief, peppers are not a vegetable – they’re actually a fruit! Peppers belong to a part of the Capsicum family, and botanically, they are considered as fruits.

As mentioned before, red peppers are very healthy. They contain high levels of vitamins C, E, and A, and they’re filled with antioxidants. Even though red peppers boost your dog’s immune system, spicy red peppers are not good for your dog.

Red Peppers That Are Safe For Dogs

These types of red peppers are certainly good for dogs. They can be used as healthy treats, and they have a bunch of health benefits. According to AKC, red bell peppers are the most nutritious of all peppers for dogs, but in moderation. Remove the seeds and stems to prevent indigestion and stomach issues. These parts aren’t healthy, and they can be hard for dogs to digest.

Red Peppers That Are Not Safe For Dogs

Even though chilies are not toxic to dogs by themselves, they contain a compound named capsaicin. Capsaicin causes the sensation of spiciness, and it can act as an irritant to dogs. If your dog ate something spicy, you could quickly relieve him by giving him a little bit of greek yogurt.

This grounded pepper is considered a spice, and it’s not recommended for dogs. There’s a chance that they also contain lots of capsaicin. Besides that, the real hazard comes from its powdery state. Just like other spices and seasonings, it can cause eye, skin, and nasal irritation. Some people even use paprika as a dog repellent, which can cause trouble for canines.

In short: You can give your dog peppers; just watch out that they’re not spicy nor in a powdery state.

As you can see, red peppers are very low in fat! That’s why they’re a great, healthy treat for your pup. Foods that are high in fat, like peanut butter, can often lead to obesity and other health problems, such as pancreatitis.

How Many Red Peppers Should Your Dog Eat?

Before using peppers as regular treats, you should slowly incorporate them into your dog’s diet. That step is important, so you can see how your dog reacts to the new food. If his reaction is okay, don’t lose a sense of proportion.

Just like any treat, red peppers should also be given to dogs in moderation. Even though they’re considered healthy, overconsumption can lead to some health problems. When giving treats to your dog, always have in mind the 10 percent rule. Treats should not surpass 10 percent of your dog’s overall diet.

Having that in mind, here are the recommendations for red pepper consumption in dogs:

With all that said, your dog can have a lot of health benefits by consuming red peppers. Red peppers are loaded with numerous vitamins, like A, C, B6, K, in addition to potassium and folate. Other than that, they have a little bit of magnesium and manganese. Also, they’re low in fat and sodium. Red peppers are the most nutritious for dogs. The riper the pepper, the more nutrients it contains.

But, how does all that contribute to your dog’s well-being?

First off, vitamin C supports healthy immunity, while vitamin A maintains your dog’s healthy vision. Vitamin E is here to make your dog’s coat shiny, as well as keeping his skin in good condition. Furthermore, vitamin B6 is necessary for your dog’s nervous system.

Moreover, red bell peppers are great hormone regulators. They maintain proper cell function and fat metabolism, so they’re good for dogs that should be on a diet. Also, red pepper ingestion leads to better digestion and a healthy gut due to dietary fiber. As a cherry on top, peppers, in general, are good for the prevention of heart disease and cancer due to antioxidants.

There are not so many health risks with giving your dog raw, red bell peppers. Besides an upset stomach when giving them too much. On the other hand, there are numerous health risks related to spicy red pepper consumption in dogs. Although they’re not lethal for canines, they can cause a lot of discomforts.

If you don’t know how to recognize if something is too hot for your dog, the common signs are:

You can relieve your dog by giving him a little milk or adding cooked pumpkin to his meals. If the symptoms persist, you may need to visit your veterinarian.

Do not give your dog peppers that have been cooked or previously covered with any onions or garlic. These vegetables can be dangerous to dogs. Garlic, onions, and other allium family members contain thiosulfate, which is toxic to dogs. Thiosulfate is not harmful to humans, but it can cause problems in dogs. This substance can lead to oxidative damage to red blood cells, which can result in anemia.

Symptoms of anemia in dogs include:

Does The Color Of Pepper Even Matter?

Peppers come in a variety of colors. Apart from red pepper being the most nutritious, all peppers are filled with essential nutrients and vitamins that can benefit your dog. The reasoning behind different pigmentation of peppers is hidden only in the time they had to ripen. Red and yellow peppers are just “younger” versions of the green ones.

Red peppers are fully ripened, and that’s why they have the most nutrients and a sweeter taste. Unfortunately, with more ripened peppers comes a higher price tag. That’s why red peppers are usually the priciest of them all. But, while looking only at dog consumption, color does not matter, only the hotness!

Now you know, peppers can be a great source of vitamins and minerals. With all that, there are numerous ways of peppers contributing to your dogs’ health. This immunity booster often found in our fridge can be a good substitute for treats. Especially if your dog needs to reduce his weight.
However, not all red peppers are canine-friendly. Never give your dog chilies, and certainly don’t have the idea to use chili powder as a dog repellent.